Vltor has developed a fast-attach locking system for firearm accessories called the KeyMod system. Not necessarily the first of its kind, KeyMod is different in one major way: it’s free. Vltor is making the specifications open to anyone who wishes to incorporate the standard into their firearm furniture and accessories.

The idea is that by allowing any company to use it without needing a license or having to pay for the rights, KeyMod can be an industry standard in the same way that Picatinny rails have become.

KeyMod is designed to let an accessory pass through standard slots that are indexed on the interior wall. This allows the user to attach and remove accessories, like grips, sling points and rails without having to remove the KeyMod-bearing surface. It is designed to compliment, not replace, Picatinny rail systems. From Vltor’s General Maganer, Eric S. Kincel:

“The concept has been bouncing around in my mind (and the Vltor offices) for a few years now and it’s finally become reality. I first introduced the KeyMod Tech data package to friends in the community, starting with Noveske.”

“The design is nothing major or earth shattering, it’s just something I thought was needed for the industry. My goal is for the industry to make this system a standard; working in parallel with the Picatinny rail; not replacing it.” 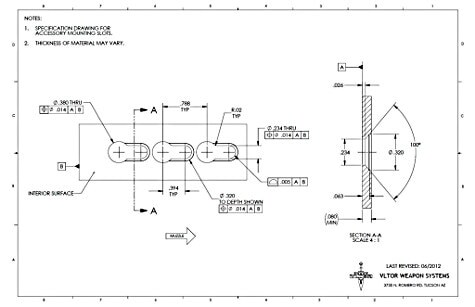 KeyMod incorporates existing designs but refines them for the world of firearms. Specifically, the way KeyMod indexes mounted accessories they can’t move backwards and fall out, not without first releasing the tension. And it uses counter-threaded screws and nuts that won’t back out on each other over time.

As rifle accessories become not only more common but for many, requirements, a simpler mounting system is welcome news. The KeyMod standard is minimalistic and designed to be both universal and lightweight. Noveske has already gotten on-board with the KeyMod system.

“As you can imagine, there are a number of companies that are already developing and/or manufacturing components that mount directly to the slots. For example, Noveske and I are making our own rail panels, to work with ‘our’ platform requirements. Other items being developed are VFGs, handstops, bipods, light, sight and sling mounts. The possibilities are endless.” 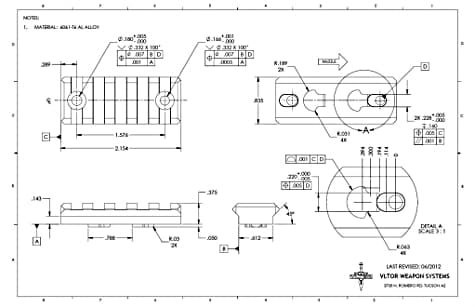 Obviously the KeyMod system will begin with AR handguards and accessories, but we see no reason for it to remain exclusive to the one platform.

While it is ambitious, the claim that KeyMod will change the way the accessory industry works, the fact of the matter is that by refraining from any types of proprietary standards, KeyMod stands a chance. While some might assume making it open and free is a risky endeavor, it could very well be what makes KeyMod successful where other mounting systems have faded into obscurity.

If you’re a manufacturer or just curious-minded, you can see the technical data package here.