The FP-45 Liberator is an interesting part of the history of the Second World War. A precursor to the Deer Gun, the Liberator was designed, finalized and mass-produced in 1945 as an inexpensive way to promote widespread insurgency across Axis-controlled parts of the world.

An extremely simple stamped metal design, the Liberator is a smooth-bore single-shot pistol chambered in .45 ACP. One million were manufactured between June and August of 1942. The idea was to give resistance fighters a way to incapacitate or kill an armed occupier and take his weapons by dumping so many of these hold-out pistols behind enemy lines that they could not possibly all be confiscated. A secondary effect was to demoralize occupying forces by picking them off in their own territory.

While many of these guns found their way to the Pacific insurgents pitted against the Japanese forces, the majority of these guns were never distributed and were eventually destroyed. They are rare, valuable, and in a way, inspiring. 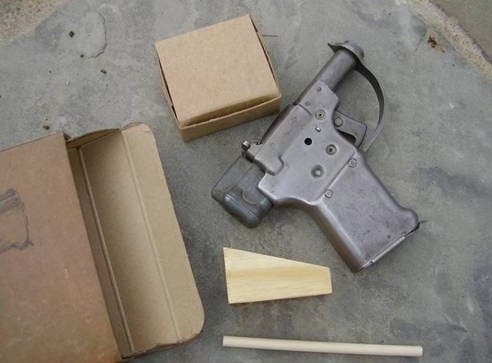 If you come across an authentic Liberator, it will set you back, in almost any condition. Which is why the Vintage Ordnance Company, LLC, manufactures a picture-perfect replica Liberator that you can shoot to your heart’s content—although that may not be much as the Liberator only weighs 16 ounces.

Vintage Ordnance used both the original plans as well as example Liberators to make their FP-45 Liberator Pistol Replica, as the Liberators produced actually varied from the designs, a result of the extremely short development cycle. The only significant change is that their replicas have a rifled barrel and discreet markings as they’re not intended to be mistaken for originals. They’re also made to tighter tolerances and tougher materials to make the safe to operate, something you can’t really attest to with the originals, which were only made to survive a few shots.

“Not readily apparent are the superior quality steels, heat treating and tighter tolerances of our reproduction. We have crafted the barrel, tube strap (breech ring) and cover slide (breech block) out of 1050 medium carbon cold rolled steel for greater strength. We have tightened the chamber tolerances to meet commercial standards and address the terrible headspace problems of the original guns that allowed them to batter themselves apart under repeated firing. Our zinc cocking piece is cast from a denser alloy than the original for greater strength.”

That being said, there is only so much you can tweak when it comes to materials while still being able to deliver on a near-identical design. Vintage Ordnance sells Liberators without the firing pin hole drilled out—rendering them un-fireable—if you prefer.

The Vintage Ordnance Liberator is available with and without replica packaging, including a reproduction of the comic-book-style instruction manual. The whole kit runs $620 including shipping, and if you just want the pistol it’s $520; a fraction of what an authentic Liberator runs.

Owning a replica Liberator isn’t the same as owning a chunk of history. But you can shoot it, and that makes up for a good bit of the difference.