Kim Rhode just made history by becoming the first ever US athlete to win individual medals across five consecutive Olympic Games.

To say merely that Rhode won the women’s skeet shooting event is an understatement. She cruised through the event with flying colors, and thoroughly stomped the two silver and bronze medalists struggling to keep up. Rhode broke the previous Olympic record of 72 targets out of 75 targets hit in the preliminaries with a staggering 74 of 75 record. She then went on to tie the Olympic skeet shooting record with 99 of 100 targets hit. Her next closest competitor, Wei Ning of China, hit just 91 targets. 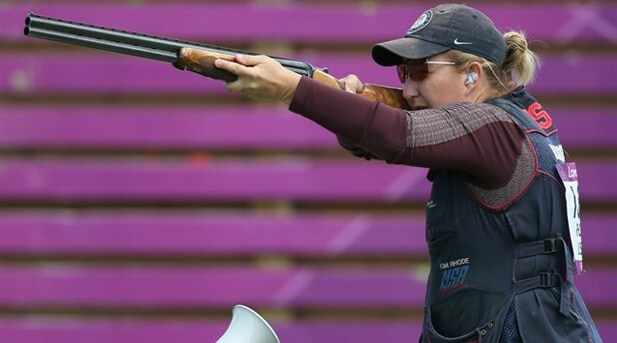 This marks the her fifth medal, but only three of them are golds. Her current record stands:

Odds are good that Rhode’s Olympic medal streak won’t end in London. Her father and coach, Richard Rhode, said “She’s got three, four, maybe five more left in her. The oldest Olympic medalist is a shooter who was 72.”

Rhode will also be competing in the Women’s Trap event, which we can look forward to later this week on Aug. 4. Even though she’s hopeful that she can take another gold, winning the skeet shooting competition has taken the pressure off. Her father added, “We’ll be shooting for fun.”