K-Var has a new Bulgarian pistol, the SLR106-47. This Krinkov-inspired pistol takes a tested and proven design and updates it with new polymer handguards, an extended barrel and chambers it for some of the most popular ammunition around.

Like the previous pistol chambered in 7.62x39mm, the SLR106-47 has a 10-1/2-inch hammer-forged chrome-lined barrel with a pinned, non-functioning flash hider. on a Krinkov, the flash hider is also an expansion chamber, or muzzle booster, that improves reliability by forcing more gas into the piston system when using a shortened barrel. Having a longer barrel with a “for looks” muzzle device not only means better ballistics, it means having no features that are prohibited in many jurisdictions.

The barrel has a 1:7-inch twist, which is perfect for heavy 5.56 NATO and .223 Remington bullets that are optimized for shorter-barreled firearms. 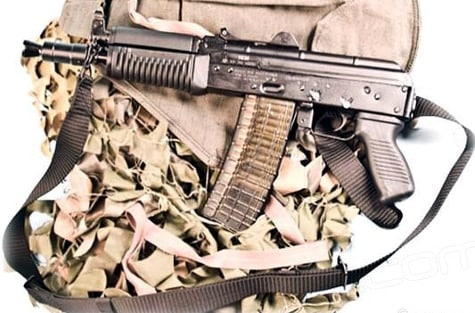 Overall the gun weighs in at about 5.5 pounds, measures just under 20 inches tip to tail and has an integrated sling point in the receiver’s buttplate. The SLR106-47 comes with one 5-round magazine, sling, oil bottle and a cleaning kit.

Like other K-Var firearms the SLR106-47 is not an inexpensive truck gun, but as prices for AK-pattern firearms rise across the board, it’s not at a huge premium.  A SLR106-47 will set you back $890 if you buy one from K-Var.

K-Var also has an optional Krinkov kit to go with the SLR106-47. Right now you can add an original Bulgarian Krinkov case, Bulgarian tactical sling and an extra 30-round Bulgarian Circle-10 waffle magazine, your choice either black or transparent, for an extra $70.

These guns are all well-known for a level of fit an finish not matched by the vast majority of AK-pattern rifles imported into the US. Durability and accuracy are top-shelf with these rifles and pistols, which give up little in terms of quality.

They’re also a great way to get a head start on a short-barreled rifle. Buy the gun now, and once the paperwork goes through, add a stock down the road. AR pistols are neat, but if you want a premium AK pistol, check out K-Var’s new SLR106-47.