In the great state of Michigan, legal adults have the right to openly carry a firearm for the purpose of self-defense, and that’s a right that citizens utilize every single day.

So, when 18-year-old Sean Combs of Troy, Michigan took a stroll through town with his M1 Garand slung over his shoulder, he probably wasn’t expecting the police to show up and slap him in handcuffs. After all, if he wasn’t doing anything illegal, then what was the problem? 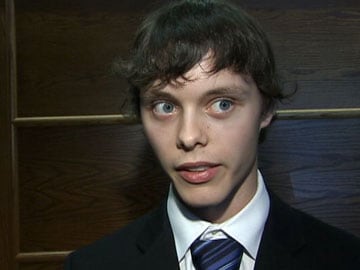 The problem, which was never openly stated but is plainly obvious, is that police and armed citizens don’t always see eye-to-eye over the issue of self-defense. Advocates of the Second Amendment believe that they have a right to arm and defend themselves, while police think that citizens should leave all the heroism to the police.

Now, we don’t want to paint police officers with too broad of a brush. We know that there are individual police officers and police forces (such as the one in Lubbock, Texas) that support a person’s right to carry a gun for self-defense. All too often, though, police officers butt heads with everyday people who just want to protect themselves.

“He Wasn’t Looking for a Fight”

The arrest of Sean Combs is a perfect example of this controversy, though we’re happy to report that this story has a happy ending.

Back in April, Sean Michael Combs, a senior at Troy High School, was walking around town with his M1 Garand. Combs’ friend, Lia Grabowski, was with Combs at the time and later told Troy Patch News, “He’s a huge supporter of open carry and the right to bear arms, and he thought he could legally carry. He wasn’t going to use it on anyone. Obviously, he could have defended himself, but he wasn’t looking for a fight.” 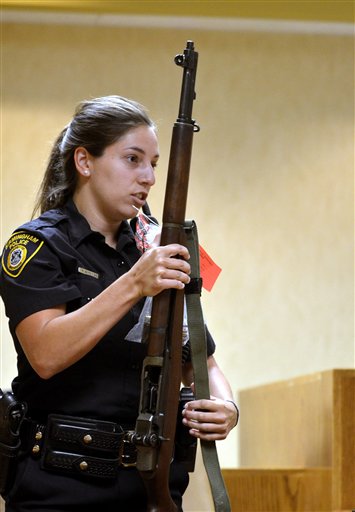 Trouble found him, though. A pair of police officers approached Combs and demanded that he show his ID. Combs initially refused, but after a bit of back-and-forth he gave in and reached for his ID. It was then that the police decided to arrest him.

The Michigan Open Carry website clarifies that the Fourth Amendment protecting against unreasonable search and seizure also happens to apply in Michigan: “under no legal obligation are you required to talk to a police officer or produce identification of any kind if you are not being detained.”

Gun rights advocates were up in arms – literally – after they heard that Sean Combs had been placed under arrest and was charged with brandishing a firearm, disorderly conduct, and obstructing an officer. 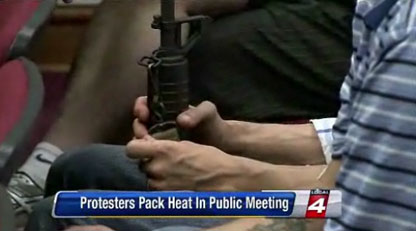 They marched to a public meeting with rifles and pistols at their side to peacefully voice their support of Sean Combs and their right to carry a weapon for self-defense. Philip Hofmeister, the president of Michigan Open Carry, was there as well. He said, “We understand that it’s not something that’s a part of the public norm or something you see in everyday life, but there is not a law against it.”

His Day in Court

Combs went to court and calmly explained why he was carrying a gun – not to start trouble, but to “make a difference in my community, to make a statement.” Police witnesses countered Combs’ testimony with their own story, but the police didn’t have the evidence to back up their claim – probably because there wasn’t any evidence of a crime to begin with.

Combs’ clever defense strategy of explaining that he was exercising his Constitutional worked brilliantly. He earned a not-guilty verdict, and three weeks later the police had to give him back his M1 Garand.

Sean Combs didn’t allow the legal battle or the police to intimidate him. As soon as he got his rifle back, he and a group of people who had organized through opencarry.org gathered in Shain Park in Birmingham, Michigan to celebrate Combs’ victory. Every single member of the small group was openly carrying a firearm.

Combs gave a rather humble victory speech, “I’m not here to make anyone feel uncomfortable or scare someone or make them feel like they’re not safe because I have a gun. I actually want the opposite; I don’t want anyone to feel like they’re in any kind of danger, because they’re not.” 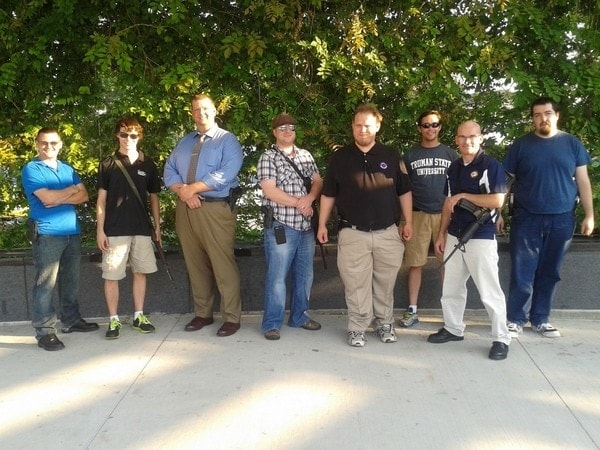 A bystander who was also at the park that day, Adrienne Ruby-Fink, shared her thoughts about the demonstration and summed up the meaning of the victory fairly well: “I am pro-concealed weapon permit, but I think carrying rifles openly in a downtown area with kids around is just ridiculous. But, I do feel it’s our right as American citizens to be able to protect ourselves.”

That’s quite a revolutionary thought, isn’t it? You can disagree with somebody exercising their Constitutional rights, but just because you disagree with it doesn’t mean they aren’t allowed to do it. If only the Birmingham police shared that mentality, then maybe all of this could have been avoided from the start.

The Cost of Breaking the Law

Combs never broke the law, but the police might be on the chopping block for making an illegal arrest. Combs and his lawyer, Jim Makowski, have been toying with the idea of filing a civil suit.

Makowski told CBS, “I can tell you one thing, we offered to dismiss this case without any cost to the city of Birmingham on over six occasions, they chose not to. If there is a civil suit, I think people need to ask ‘Why wasn’t this case dismissed before trial?’”

That’s a pretty good question, but here a few good ones to add to the list: What good is the right to carry a weapon for self-defense if the police can get away with arresting you for it?

Why do police think it’s OK to arrest someone who refuses to produce ID, when they’re under no legal obligation to produce ID?

Do gun owners have to forfeit their Fourth Amendment right, which protects them against unreasonable search and seizure, just because they’re exercising their Second Amendment right to bear arms?

We think that the answers to these questions are obvious. Some politicians and police officers might want to go through a refresher course.