On Monday, a pair of Democratic lawmakers introduced new legislation that would effectively ban the online and mail-order sale of ammunition for average, law-abiding citizens.

“It’s time to close the loophole that’s allowing killers — deranged, insane — and even terrorists to buy ammunition online,” Lautenberg said at the Monday news conference on the steps of Manhattan’s City Hall. “You don’t have to be a scientist to understand how wrong this is.”

The lawmakers said the mass shooting in Aurora, Colorado, served as the impetus for the gun control measure.

“The shooter who killed 12 and injured 58 in an Aurora, Colorado movie theater this month had purchased over 6,000 rounds of ammunition anonymously on the Internet shortly before going on his killing spree, according to law enforcement officials,” the two said in a statement released on Saturday. “The shooter used a civilian version of the military’s M-16 rifle with a 100-round drum magazine, a shotgun and two .40-caliber semi-automatic handguns commonly used by police officers.”

“If someone wants to purchase deadly ammunition, they should have to come face-to-face with the seller,” Sen. Lautenberg said.  “It’s one thing to buy a pair of shoes online, but it should take more than a click of the mouse to amass thousands of rounds of ammunition.”

Rep. McCarthy also emphasized the “need” for ammunition purchasers to come face-to-face with suppliers, adding that gun owners should back the bill because of its capacity to thwart criminals. 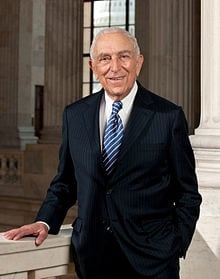 “The Stop Online Ammunition Sales Act pulls ammunition sales out of the shadows and into the light, where criminals can’t hide and responsible dealers can act as a line of defense against the planning and stockpiling of a potential mass killer,” said Rep. McCarthy.

“Law-abiding gun owners and shooters should support this legislation because it hinders criminals from abusing the Second Amendment right that our nation promises and could save innocent lives in the process,” she added.

While it’s difficult to imagine a scenario where gun owners would back this bill, will it gain real traction in Congress?

Not likely, given the less than tepid response Congressional leaders have had with respect to gun control, even in the wake of the Colorado massacre.

On Thursday, Senate Majority Leader Harry Reid told reporters, “With the schedule we have, we’re not going to get into the debate on gun control.”  Sen. Reid is in charge of scheduling the Senate’s agenda.

House Speaker John Boehner expressed similar disregard for gun control.  In responding to comments made by the President, he told reporters, “AK-47s, all right, are not allowed to be in the hands of criminals. That is the law.”

“It’s going to be acted upon next week, and we’re very optimistic,” Lautenberg told CNN.