In a recent article – The End of Gun Control? – Forbes contributor and infotech writer Mike Gibbs said the following:

I’m in favor of tighter gun control and a ban on weapons that are unnecessarily powerful but I’m afraid that technology will soon make any legislation that limits the availability of any kinds of guns ineffective.  To understand why this might happen, you need to understand a technology called 3D printing.

So, in a nutshell, Gibbs fear is that a criminal will use 3D printing (see video below):

To make, say, one of these (see video below):

Is there any merit to Gibbs concern?  In other words, can you really print a gun?  Gibbs wrote:

Yep, you can and that’s exactly what somebody with the alias “HaveBlue” did.

To be accurate, HaveBlue didn’t print an entire gun, he printed a “receiver” for an AR-15 at a cost of about $30 worth of materials.

The receiver is, in effect, the framework of a gun and holds the barrel and all of the other parts in place. It’s also the part of the gun that is technically, according to US law, the actual gun and carries the serial number.

When the weapon was assembled with the printed receiver HaveBlue reported he fired 200 rounds and it operated perfectly. 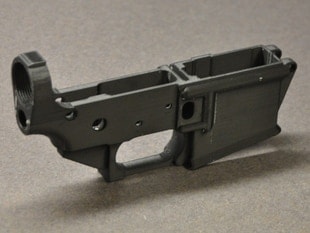 With the costs of 3D printers dropping, one can purchase a 3D printer for around $500, Gibbs argues that in the not too distant future almost everyone will have the means to make weapons.  So, if we are to accept Gibbs premise, it appears that technology will eventually render any gun control law useless.

But what Gibbs doesn’t understand is that gun control is already ineffective, independent of 3D printing.  The streets and the black markets around the world are awash with guns.  As a result, criminals and even the mentally ill have no difficulty obtaining firearms through illegal channels.

The Internet offers all sorts of options for thugs and gangsters.  Currently, there are online marketplaces that will sell any weapon to any individual, anywhere in the world, as a recent Guns.com article pointed out.

So, 3D printing or no 3D printing, the wrong people already have guns or unfettered access to guns.  The real danger, and what I worry about, is that through gun control legislation the right people may lose the best means they have at protecting themselves.

***
Putting aside the politics of gun control, if you could 3D print any gun in the world, which would you choose to make?