The U.S. Army is looking for a compact version of their new M110 Semi-Automatic Sniper System (SASS). While the M110 has met and exceeded many expectations for an AR-10-pattern sniper rifle, there’s no refuting the fact that it is large and it is heavy, among other concerns.

The new rifle will retain the M110 designation but with a new acronym, CSASS, for Compact Semi-Automatic Sniper System, and it must meet the same operational and environmental requirements as the SASS. Just in a smaller package.

That really shouldn’t be too hard to do as the current M110 is a beast. Chambered in .308 Winchester, the SASS features a rifle-length gas system and full-length quad rail, fixed A2-style buttstock and 20-inch heavy profile match barrel. With its Harris bipod, Knight’s Armament suppressor and Leupold Mk4 3.5-10x40mm M2 illuminated scope, the SASS weighs over 15 pounds, loaded. 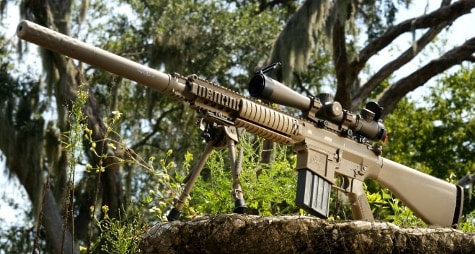 The CSASS-specific requirements are that it must have a collapsible stock and an overall length that measures in a not more than 36 inches with the stock collapsed and no suppressor attached, which is a slight reduction in size. The CSASS must weigh no more than 9 pounds without ammo or accessories.

What’s interesting about those requirements are that they’re not all that different than the current M110s in service. This lends support to the rumors that the SASS is not holding up well in the field. While plenty accurate, the M110s are reportedly burning out at a pretty high rate, with “[One] source [telling] us that about half the compliment of M110s in any one unit are being cannibalized for parts to keep the other half going.”

By requesting a shorter version, the Army can phase out the SASS with a new, more durable rifle. The solicitation is not for a small number of rifles, either, which may be an indication that the Army may be looking for a replacement for the M14s still in service. “They’ll be looking to build or convert 125 rifles per month with a capability to ramp up to 325 rifles per month. 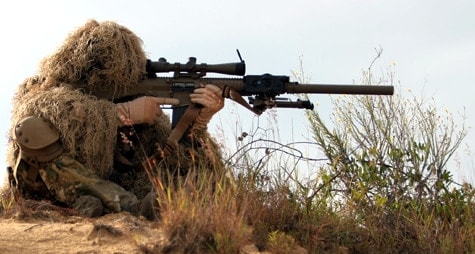 “Reading between the lines, 325 rifles a month is more than they’d need to outfit scout/sniper teams. At that rate, figuring a multi-year contract, that’s enough to outfit the DMRs Army wide. The logical conclusion is that the Army is looking to replace the venerable M14′s latest configuration with something more familiar to the current grunt that’s smaller, lighter and more easily maintained than the EBR.”

The M110 SASS is based on the Knight’s Armament SR-25, their Enhanced Match Rifle. The SASS has an effective range of 800 meters, and though the CSASS solicitation page doesn’t list a range requirement, we expect it to be close. The CSASS must be capable of shooting groups no greater than .6 inches at 110 yards with match ammunition, which is a higher standard than the SASS of 1.1-inch groups at 100 yards. You can check out the specifics of the request on the Federal Business Opportunities page.

The M110 SASS is currently in service with both Army snipers as well as a handful of Marines.