A Gun's Role in your Prepper’s Kit

When the first caveman decided to keep a little more food or fuel for his fire than what he needed to get through the week, he became a prepper. Odds are this first prepper decided he needed a good-sized club or rock to help make sure he could hold onto it.

Today’s Preppers are the same way. Shelter, food and fuel are stockpiled and a weapon (usually a gun) is obtained to be able to protect it from those that did not.

What is a ‘Prepper’?

Preppers are simply a shortened wordplay for one who practices preparedness. “But what are they prepping for?” you may ask. The correct answer is anything and everything.

In short-term disasters such as hurricanes, wildfires, social unrest, and earthquakes can disrupt your community and leave you in the dark until everything starts to return to normal.  This can last for weeks, or even months.  For example, following 2005’s Hurricane Katrina, parts of Mississippi and Louisiana endured six weeks of power loss and had to rely on roving patrols of National Guard for emergency response. Both landline and mobile phones were offline for most of this.

Then there are ongoing doomsday scenarios such as huge solar flares, electromagnetic pulse (EMP) waves, global pandemics, thermonuclear exchange, and the like that can truly alter the face of what we think of as civilization. In the worst case of these, the economy completely collapses, money becomes worthless, the mail stops, the power grid and phone system shuts down and the government at all levels disappears. This is often referred to as ‘The End of the World As We Know It” (or TEOTWAWKI) by the prepper community. The new reality is having to wash your clothes in a pickle bucket for the rest of your life.

Weapons in a Prepper’s Kit

In both the short-term hurricane/earthquake scenario and the long-term TEOTWAWKI disaster, a weapon can be seen as an essential item for personal protection. Some adherents will prefer edged weapons, bows and melee arms for this for their own reasons. Others will choose a firearm. From the cave dweller’s rock and club, the evolution of the weapon has marched forward over millennia until you have today’s handguns and longarms. 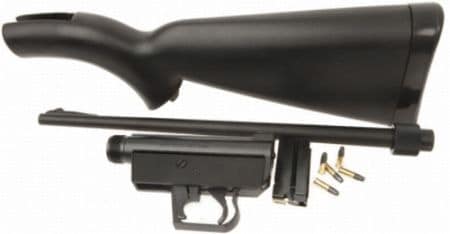 Moving past personal protection, a firearm also has valid applications in both protecting food plots from wildlife and in taking game through hunting in long-term survival situations. While hunting with primitive weapons is a popular hobby, it can be argued that modern firearms are more survivable and effective.

For instance, a modern compound bow is good for taking game out to 50-yards, but it needs to be restrung every other year to be safe enough to use and the arrows often are not reusable even if they are recovered.  Even an inexpensive modern sporting rifle can take game reliably at 300-yards, and can operate for decades with only regular cleaning if used conservatively and stored properly.

Choice of firearms for a prepper

While a certain case could be made for having something belt-fed and Class-III for your home defense in a worst-case scenario, it should be remembered that budgetary and legal constraints could limit your selection. With that in mind, a prepper needs to make wise decisions. 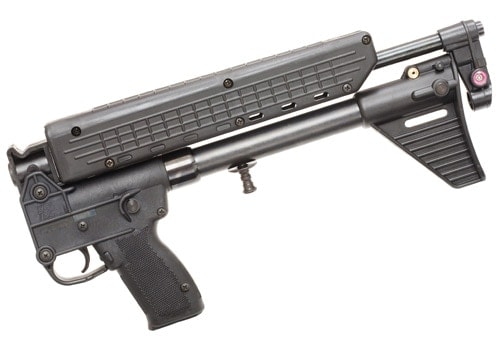 Look for a firearm that has a proven record of accomplishment and has been on the market for years from a major manufacturer. This will ensure that most of the ‘bugs’ have been worked out of a design and spare parts are available cheaply to add to your stockpile. An effective, modern, and inexpensive caliber choice (i.e. 9mm or 223. Remington) should be decided on so that a sufficient quantity of ammunition can be acquired. In either the short term or long-term disaster scenarios, it is unlikely that you will have a chance to run down to the local Big Box and buy more.

Ideally, at least one handgun for personal protection and at least one long arm for hunting and defense should be acquired to round out a prepper’s personal arsenal. If your pocketbook doesn’t allow for this, look into a compact pistol caliber carbine like the Kel-Tec Sub-2000 or something that breaks down easily like the new Henry Survival rifle. These can be carried in a backpack or bag discreetly and expand your effective range out past what a handgun will normally fire. Of course be sure to consult your local laws about carrying a concealed weapon if you ‘bug-out’ and do not or cannot stay in your residence to ensure that you do not add to the public hysteria. This is where pre-disaster CCW permits come into play.

No matter which firearm the prepper chooses, sufficient pre-disaster training and safe practice with that firearm is necessary to ensure that the selection was not a waste of resources.

Remember, you are your own last line of defense.