Day 6 in the Olympics has been action-packed for the world of shooting. We caught the men’s double trap qualifying round and final, as well as the men’s 25 meter rapid fire pistol qualification.

In the double trap event, two clay pigeons are launched at different angles and with a variable delay of up to one second. Unlike in many other shooting sports, a perfect score is fairly rare. The Olympic Committee has been tweaking the difficulty over the years ensure that a single missed shot isn’t automatically a nail in the coffin. The competitors shoot at 50 targets over three rounds. 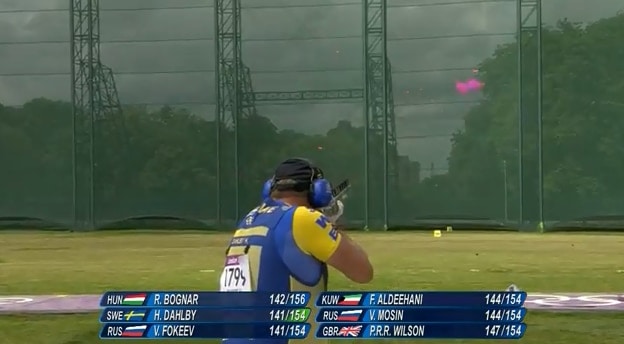 Local sharpshooter Peter Wilson got the best score for his country of Great Britain with a total score of 143, shooting 48s in the first two rounds and 47 in the third. His two closest competitors were Vasily Mosin of Russia and Fehaid Aldeehani of Kuwait, both with scores of 140.

The other three qualifiers were Vitaly Fokeev of Russia with 139, Hakan Dahlby of Sweden with 137, and Richard Bognar of Hungary with 137.

Things were looking grim as Peter Wilson stepped up in the final round to shoot the last 50 pigeons. He missed five targets, bringing his total score to 188. Second place shooter Hakan Dahlby of Sweden shot a remarkable 49 targets, but that combined with his low qualifying score was not enough to earn him the gold.

Russia’s Vasily Mosin fell to third place with 185, and he was able to beat out Fehaid Aldeehani of Kuwait in the tiebreaker shoot-off for the bronze. 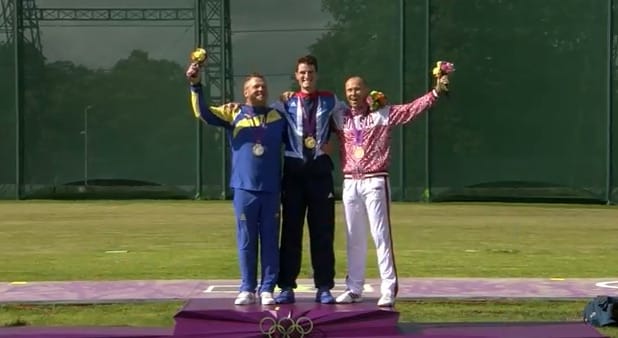 We would’ve loved to see an American on the podium, but we’re happy that a Brit secured the gold. It’s always nice to see an athlete winning a gold when his home country is also hosting the Games. How great would it be to win a gold medal, and then immediately hit the local pub for a few pints, take advantage of your well-earned bragging rights, and use your new bling to leverage a few phone numbers from starstruck gals?

You can catch the video of the final and the medal ceremony here.

In the rapid fire pistol event, competitors have a limited amount of time to shoot five different targets within a time window of eight, six, or four seconds. The nifty electronic scoring system automatically registers a late shot as a miss. A stage consists of two series of each type, and they run two stages for a total of 60 shots fired. 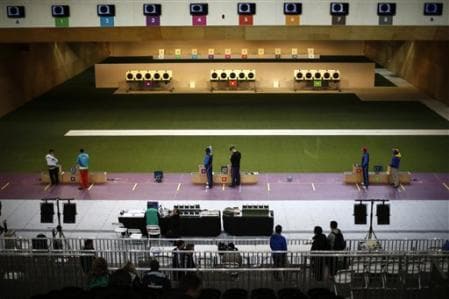 The results of the first relay:

The results for the second relay:

The results for the third relay:

At most, all we can do is speculate over these scores. Athletes will compete in the second half of the men’s qualifier tomorrow, so once that’s done we’ll have a better idea of who will be gunning for the finals.