There’s been a flurry of shooting activity on day 7 of the London Olympic Games, but unfortunately there weren’t an Americans who shot their way to a medal.

During this competition, athletes shoot 60 shots from a prone position with a .22 long rifle. They had 75 minutes to complete the series, which averages out to one shot every 1:15 minutes.

Sergei Martynov of Belarus started with a commanding lead by equaling the world record with a perfect 600 score. Lionel Cox of Belgium just barely missed the perfect score at 599, and Rajmond Debevec of Slovenia scored third at 596. 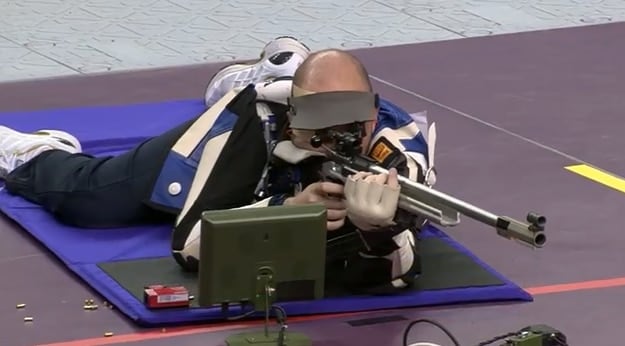 A bunch of people with a score of 595 had to enter a shoot off for the remaining five qualifying slots. The qualifiers were Daniel Brodmeier of Germany, Jinseop Han of South Korea, Niccolo Campriani of Italy, Joydeep Karmakar of India, and Bojan Durkovic of Croatia.

American Michael McPhail was in the group of people tied at 595, but he just barely missed by coming in at ninth place in a competition where only eight people can qualify. Ouch, that’s gotta sting. Fellow American Eric Uptagrafft took 16th place overall.

Sergei Martynov of Belarus continued his impressive streak and scored 105.5 in the final round to set a new final world record and win the gold.

Linoel Cox of Belgium nabbed the silver with a final score of 701.2, and Rajmond Debevec of Slovania earned the bronze with 701.0. 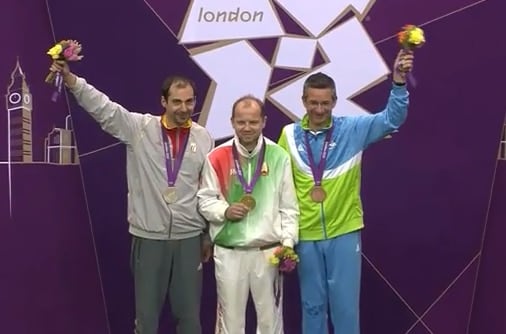 Shooters completed the qualification series that they’d started yesterday. The six qualifiers were Alexei Klimov of Russia with a final score of 492, Feng Ding of China at 488, Leuris Pupo of Cuba at 586, Vijay Kumar of India at 585, Jian Zhang of China at 584, and Christian Reitz of Germany at 583. 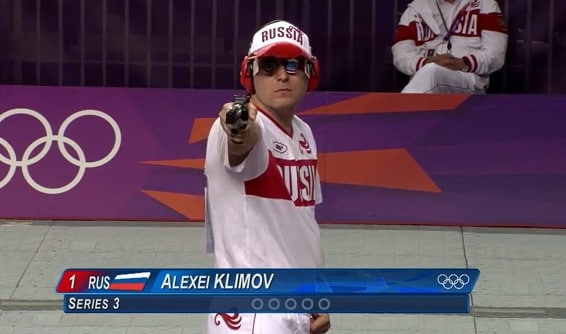 Americans Emil Milev and Keith Sanderson were in 13th and 14th place respectively with tied scores of 578.

The athletes got shuffled around quite a bit in the final. Alexei Kilmov dropped from first to fourth, giving Leuris Pupo the opportunity to win the gold for Cuba, equaling the final world record in the process. Vijay Kumar won the silver for India, and Feng Ding will be taking the bronze back to China. 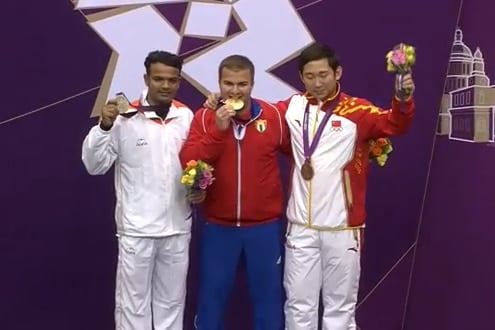 This hasn’t bee a great day for America in shooting sports. Not only did we miss several opportunities to win medals in shooting, but China also pulled ahead on the overall medal count. They’re currently beating the US with two more golds at 20 and four more medals overall at 41.