5 Thugs vs One Gray-Haired Gun Owner

David and Goliath. The 1980 Men’s U.S. Olympic Hockey team. The tortoise and the hare. The first Rocky movie.

We all love underdogs. There’s just something about a humble, hopelessly outmatched person pulling through to triumph over a more powerful competitor that puts us on the edge of our seats. It’s rare that you get to see a real-life example of an average citizen beating overwhelming odds to do something spectacular.

A Quick Smash and Grab 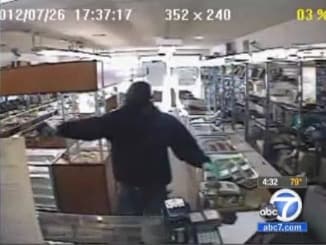 Earlier this Wednesday in Garden Grove, California, one woman proved that messing with an underdog can be dangerous.

ABC Local news showed surveillance footage of a bizarre robbery. It started with an SUV backing into a handicap parking space directly in front of a strip mall jewelry store. Moments later, five men who most definitely were not handicapped jumped out of the car and poured into the store. Two of the men trained handguns on the store employees while the other three pulled out pillow cases and demanded money.

They were expecting to get some jewels and precious metals – what they weren’t expecting was some hot lead.

What Could Go Wrong?

The store owner, an unnamed older woman, was in the back of the establishment when she heard the robbery break out. She grabbed her gun, ran to the front, and fired two shots at the robbers. She didn’t land any hits, but the robbers took that as their cue that they had overstayed their welcome.

What followed was a scene that you’d expect to see from the three stooges. One of the men fired a shot that traveled harmlessly into the ceiling, and then the five men quickly tried to push their way through the open-only door. They’re lucky that the store owner didn’t fire a third shot – if her gun was powerful enough, she could have hit every one of them with only a single bullet.

Eventually, one of the doofuses realized, “Oh, we should pull” and the would-be thieves escaped the wrath of the gun-toting old lady. It’s a good thing they did, too. The gun owner charged after them, so things probably wouldn’t have gone well for the robbers if they’d stuck around.

The suspects fled the scene—but just barely. The getaway driver almost drove off without giving his buddies a chance to jump in. No honor among thieves, eh?

Altogether, the robbery lasted about 30 seconds. The only object that was stolen was a customer’s cell phone and nobody was injured. If the Olympics had a competition to determine the world’s worst robbers, these guys would all be in London right now fumbling over each other for the gold.

Police are investigating, but they don’t know the identity of the robbers. They claim to have found DNA evidence on the scene, which is being analyzed. 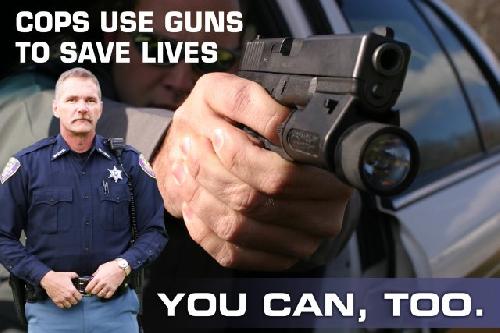 The police have not expressed any intent to arrest the gun owner for firing her weapon, and they are even able to admit (begrudgingly) that she was right to take matters into her own hands.

Garden Grove Police Lt. Jeff Nightengale said, “Our official recommendation is that business owners should not take the law upon themselves. It is difficult because when you start shooting guns those rounds can end up anywhere. We would rather have the crime happen and have good witnesses rather than putting someone’s safety in jeopardy.” And added, “The store owner feared for the safety of her employees and customers, so she had a right to defend herself.”

That’s politically correct police lingo for, We don’t like it when civilians shoot at people, but if we just came out and told you not to use a weapon to defend yourself in the middle of a story like this, then we’d just look dumb.

So, there you have it. The next time you have the opportunity to place a bet on a little old lady with a gun up against a gang of thieves, you might just want to go for the dark horse.