Some ideas seem so obvious. Their brilliance lies in their simplicity. Mr. Ammo Can is one of these—simple, obvious and priced right. 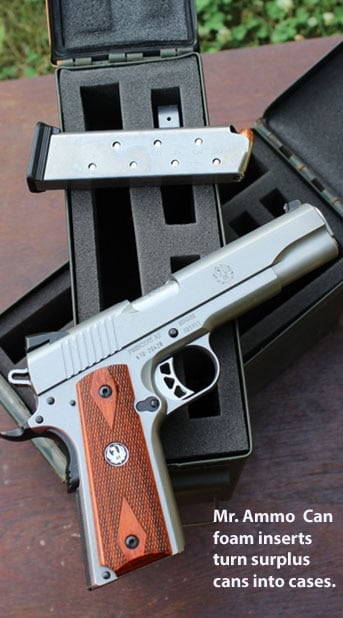 It’s an ammo can.A .30 caliber or .50—for now.But it isn’t the can, actually.You provide the can.It’s what’s in the can.Wait—it isn’t that either.You provide that too, in this case a Ruger SR1911.

The oddly named Mr. Ammo Can is what goes between the gun and the can.

Mr. Ammo Can is actually nothing more than a well crafted piece of open cell foam designed specially to turn a basic surplus ammo can into a rock-solid gun case.

The pictures pretty much say it all.

But let me elaborate.The foam block is comprised of three distinct pieces.There is a bottom, which is solid.It is adhered to the mid section, which has a number of slots cut through.The third piece is separate and adheres to the lid of the can.

The result is a uniform mass of foam that protects all sides of your gun, or guns.The middle slots are perfect for magazines.

I’ve been hauling around the smaller can with the Ruger SR1911 in it now for a couple of weeks. I really like the size. It tucks away very neatly and is easily hidden. I painted the side of the can, just so I would know what was inside.

After all, the surplus ammo can has been a staple for decades, now. I have several, in varying sizes, dedicated to various different things. My old man was fond of spot lights that plugged into cigarette lighters (mainly because he would regularly find himself on his working on his old truck in the dark on the side of the road). He kept the lights (I found three of them after he died) in ammo cans. He kept tools in ammo cans. Fishing tackle. You name it, I bet he has stored in an ammo can. I still don’t know how he ever kept them straight, but I guess it didn’t matter—they were always with him.

And that’s the real beauty of the foam inserts.While a good ammo can will keep something dry (especially ammo), it isn’t designed to protect much.Except ammo.

But the foam makes these old surplus cans into really nice cases.  And check out the prices. The inserts are reasonable. $12.99 for the .30 insert (and it ships free). $14.99 for the .50 cal. They actually seem very affordable when you consider the patience and skill it would require to cut foam this precisely without specialized equipment. And the cans are out there for next to nothing. I picked up the .50 caliber can for $6 bucks. 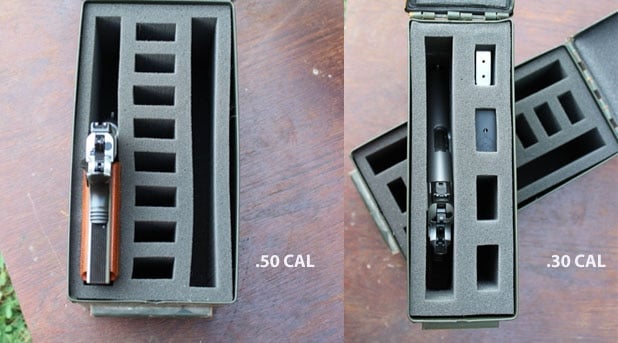 Now compare that (a waterproof steel case, with foam—already cut—for around a couple of sawbucks) with what you’d pay for one of these highfalutin plastic pistol cases. If you are inclined to go with some of the plastic, Mr. Ammo Can can help you there, too. After all, they can cut the foam.

Mr. Ammo Can is my kind of case. And I like that it is a cottage industry. Ron Capurso and his son Ron Capurso are the men behind the can, and they seem to me to be doing it right.