An American earned a gold medal and an Italian shooter set a jaw-dropping world record. All-in-all, it’s been a pretty impressive day for Olympic shooting.

In this shooting event, athletes fire 20 shots out of a .22 long rifle in the prone, standing, and kneeling positions.

Right off the bat, things were looking good for the US of A. Jamie Gray represented the stars and stripes when she shot an impressive 592. Her next closest competitor, Ivana Maksimovic of Serbia, shot 590, followed by Daria Vdovina of Russia at 585. 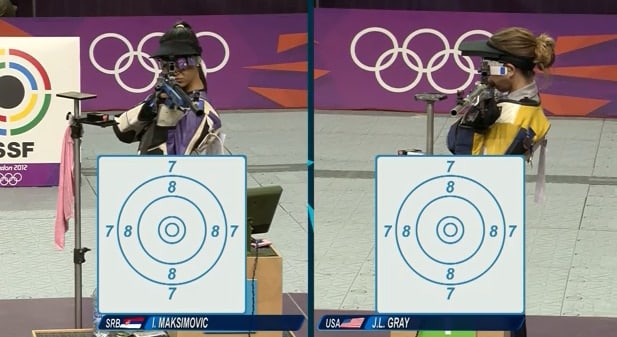 The remaining five qualifiers were Adela Sykorova of the Czech Republic at 584, Agnieszka Nagay of Poland at 584, Snjezana Pejcic of Croatia, Barbara Engleder of Germany at 583, and Sylwia Bogacka of Poland at 583. Engleder and Bogacka defeated Chinese and South Korean shooters in the tie breaker to go to the final.

Gray was able to hold onto her lead to shoot an amazing 99.9 in the final round for a total score of 691.9 – which, by the way, is a new Olympic record.

Ivana Maksimovic of Serbia stayed close behind Gray for the silver, but Vdovina slipped to seventh place, giving Adela Sykorova a chance to leap forward for the bronze. 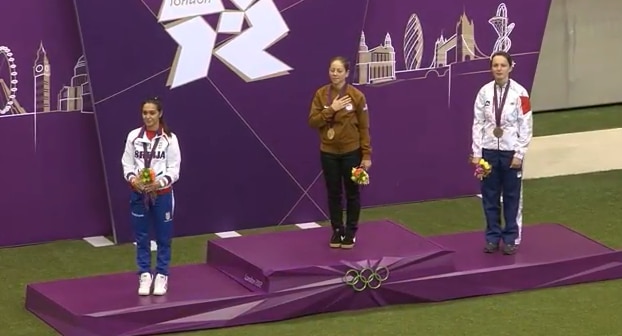 It’s been a while since we could sing the Star-Spangled Banner during the award ceremony of a shooting event. Thanks, Jamie Gray, for reminding the world that the US knows its way around a firearm.

Athletes shoot at three different sets of 25 targets – 10 targets being thrown to the left, 10 to the right, and five straight-away in each set. Six qualifiers move on to shoot an additional 25 targets in the final round. Olympians can take two shots at targets during the qualifiers, but only one shot in the final.

Jessica Rossi of Italy started the competition with a bang when she shot a perfect 75 score to set a new world record. We were cheering for Rossi’s two American competitors, but we’ve gotta admit – that’s pretty impressive. Our hats are off to you, Rossi. 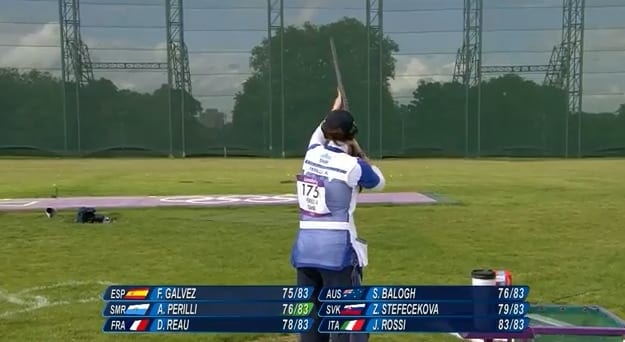 Zuzana Stefecekova of Slovakia took second place with 73, and there was a third place tie at 72 between Suzanne Balogh of Australia and Delphine Reau of France.

The remaining qualifiers were Alessandra Perilli of San Marino at 71 and Fatima Galvez of Spain. Galvez beat out two competitors in the shoot off to secure the final slot.

Jessica Rossi tried to maintain her perfect streak, but she missed just one shot for a final score of 99. That was still good enough to set a final world record and win her the gold, though.

Three of the competitors, Stefecekova, Reau, and Perilli, tied with a final score of 93 each. Stefecekova won the shoot off to secure the silver for Slovakia, and Reau will be bringing the bronze back to France. 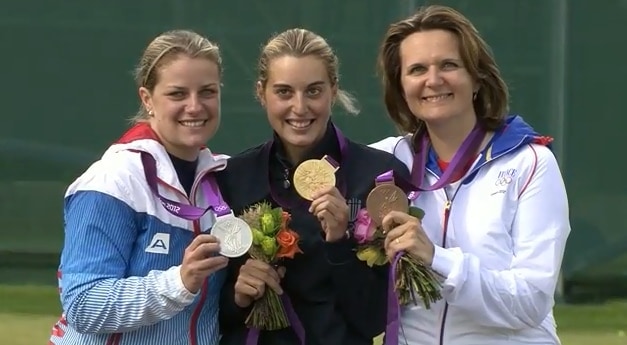 It’s a bit disappointing that Kim Rhode wasn’t able to transfer her success from the skeet event into the trap event, but we certainly can’t begrudge sharpshooter Jessica Rossi for such an impressive display. That was a gold medal that she definitely earned!