Illinois Gov. Pat Quinn is renewing efforts to ban “assault” rifles and high-capacity magazines, citing the shooting in Aurora Colorado as the driving force behind the gun control legislation.

After claiming that he is strong supporter of the 2nd Amendment in a letter to state lawmakers this week, Quinn did an about-face and said that the “proliferation of military-style assault weapons and high-capacity ammunition magazines undermines public safety and the right of personal security of every citizen.”

He then employed what many consider to be backdoor politics to gut a moderately pro-gun piece of legislation, S. 681, which would have allowed Illinois residents to buy ammunition online or via the mail from Illinois suppliers (currently residents can only buy ammo from out-of-state dealers), and add language prohibiting the manufacture, delivery, sale and possession of semi-automatic “assault” weapons and attachments.

The process by which he made the change is called an amendatory veto, which gives the governor power to amend a bill, provided that he doesn’t significantly alter its meaning.  But tacking on the following to an ammo bill that had bipartisan support in both chambers would in the eyes of any rational person violate that criterion:

(For more on the amendatory veto and Quinn’s abuse of power, check out Kurt Hoffman’s article at Examiner.com) 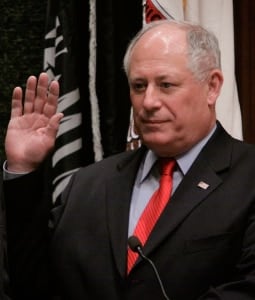 As reported by the Associated Press, the proposal would specifically ban the AK-47, AR-15 and TEC-9.  And in a way, it would be confiscatory.  In other words, if one couldn’t prove they had purchased the firearm prior to the ban, then he/she would face punitive consequences.

Naturally, the sponsor of the bill felt “disappointed” by Quinn’s abuse of power.

“This is something that was supported by Republicans and Democrats across the state, and this makes it a very controversial bill all of a sudden,” Luechtefeld told the Chicago Tribune. “This is politically motivated. It’s on people’s minds right now because of what happened in Colorado, and the governor wants a piece of the publicity.”

But on Tuesday, Quinn defended the move.  He told reporters in Chicago that, “It’s very clear that these particular weapons are not designed to do anything but to have human targets.”

While there’s little chance that Quinn’s amended bill will pass through the state House and Senate, there’s a good chance that the ammo provision is dead in the water, which amounts to a win for the pro-gun control crowd.

“We have a national crisis on our hands. Chicago has a crisis on its hands,” said Dan Gross, head of the Brady Campaign to Prevent Gun Violence. “We have to do everything we can do to prevent tragedy from happening.”