On Sunday, a lone gunman walked onto the premises of the Sikh Temple of Wisconsin in suburban Milwaukee and opened fire as congregants were preparing for Sunday services.  By the time the shooting stopped, seven people lay dead, including the shooter who was killed by police, and three others were critically wounded.

Authorities have identified the shooter as Wade Michael Page, a 40-year-old Army veteran who “may have been” a white supremacist.

The Sikh Temple of Wisconsin is located in the quiet suburb of Oak Creek.  On Sunday morning, around 10:30 am, as temple members were reading scriptures and preparing food for the main service and community lunch, Page opened fire with what police believe was a legally purchased 9mm handgun.

According to Oak Creek Police Chief John Edwards shots were fired both inside and outside the temple.  When police arrived, they attempted to apprehend Page peacefully.  But he wasn’t willing to go quietly, he shot at police, wounding an officer.

“They gave the individual commands. He didn’t respond to those,” Edwards said. “He shot some of the squads, damaging them, and he was at that time shot at by one of our officers with a rifle.”

When asked about the officer wounded in the attack, Edwards said that, “it was very close range.”

“He was tending to someone down in a crouch position, what it appears,” the police chief said. “And the individual walked up on him, around a vehicle and engaged him very closely – inches to feet, and fired at him. He was shot between eight and nine times.”

Edwards added the wounded officer was “resting comfortably with his family and looks like nothing’s life threatening at this point.”

The victims’ names have not yet been released, but authorities have said their age’s range from late 20s to around 70.  Three people remain in critical condition at Froedtert Hospital, CNN has reported. 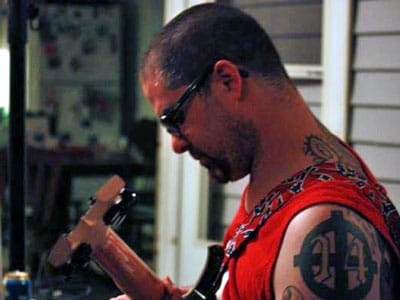 Wade Michael Page was born on Veterans Day in 1971.  In 1992, he joined the Army and served for six years, until 1998, when he was discharged for “patterns of misconduct,” according to Army Spokesman George Wright.

During his years of service, he worked as a repairman for the Hawk missile system before changing positions to become one of the Army’s psychological operations specialists, according to the defense official.

As reported by the Newsday, “Psy-Ops” specialists are “responsible for the analysis, development and distribution of intelligence used for information and psychological effect; they research and analyze methods of influencing foreign populations.”

The Southern Poverty Law Center, a group that has studied hate crimes for decades, has reported that Page was “a frustrated neo-Nazi who had been the leader of a racist white-power band,” called ‘The End of Apathy.’

Chief Edwards said that Page has a criminal record, including separate convictions for DUI in Colorado in 1999 and for criminal mischief in Texas in 1994.

Authorities are still investigating to determine a motive.

Already politicians across the country are clamoring for gun control in the wake of the mass shooting in Aurora, Colorado, but in the ensuing weeks, one can expect the cries for gun control to reach a fever pitch given this latest tragedy in Oak Creek.

On Sunday, in an interview with Huffington Post, House Minority Leader Nancy Pelosi (D-CA) lamented the lack of unity on the issue of gun control.

Looking ahead, Pelosi wants to have a public dialogue on the topic, one designed to bring people together in order to precipitate gun reform.

“We have to have a national conversation about this. We have to bring people together at the table to say, listen to what our law enforcement people are saying … They would be a very respected voice in all of this.”

If people could hear police officers talk about how current gun laws are “stacking the deck against us as we go out there,” it could hugely impact people’s perspectives on the debate,” she added.