You’re reading Guns.com, so we’re going to go out on a limb and guess that you probably own a gun. Some of you might just be hobbyist shooters at the shooting range, and others probably use guns for hunting. Regardless of how you use your guns for weekend recreational activities, every single personal firearm has the potential to be used a tool for self-defense.

We don’t exactly look forward to the day when we’re forced to use a firearm to defend ourselves, but if that fateful day ever rolls around we’ll be glad that we have a pistol nearby. Why? Because of cases like this one from Plano, Texas, wherein a gun-wielding home owner thwarted a potentially dangerous home invasion.

Police are still trying to piece together the details of what happened. Some eye witnesses report that the home invasion included as many as three robbers, but the police have only captured one suspect. Here’s what we do know: 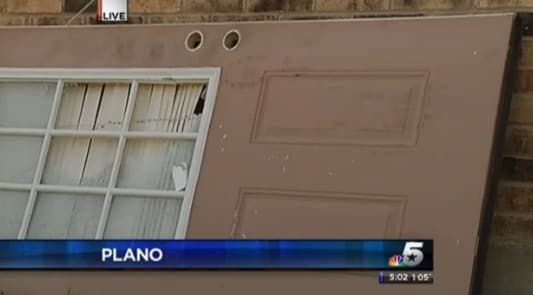 The alleged burglar(s) started the robbery rather politely – by knocking on the door. The home owner was home at the time, but he did not come to the door for unknown reasons. Taking that as the cue that the house was ripe for the picking, the thief or group of thieves attempted to break into the home.

One of them must have seen too many cop movies, because he tried to kick down the door SWAT-style. He put a couple boot prints onto the front door, but past that all he managed to do was alert the homeowner that something was very wrong.

The thief used a brick to shatter the window of the front door – meanwhile, the home owner phoned 911. According to Plano Police Officer David Tilley, the home owner told the dispatcher that there was a break-in and that he was going to defend himself with his firearm if necessary.

They say that what you know can’t hurt you, but in this case that definitely doesn’t apply. The would be-thief’s ignorance nearly cost him his life. The robber broke into the house and confronted the home owner at the top of the stairs. The thief then charged “towards (the home owner) at a rapid pace,” said Tilley, forcing the home owner to raise his gun in self-defense.

The home owner shot at least one round at the robber, striking him. The suspect quickly fled from the residence – the first and only smart thing that he’d done all day.

The robber hopped in his car and peeled out, but neighbors gave a full description of the car and a few other men who were running from the scene to the police. The authorities located the man in his vehicle a short time later and hauled him off to a nearby hospital where he is in unknown condition.

The home owner, besides being shaken by the event, is faring much better than the gang of foiled robbers. CBS DFW news reports that no charges are expected to be filed against the home owner. 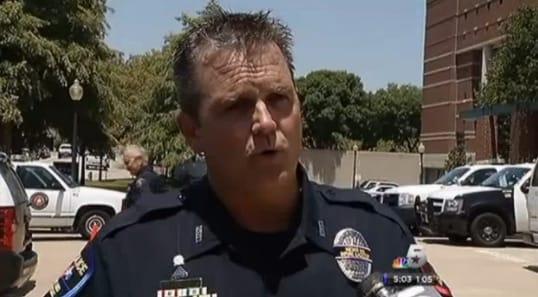 One officer added, “Once you’re placed in a situation where you actually have to discharge a firearm at a human being – basically he was trying to protect himself – it’s tough.” It’s always funny listening to police dance around the subject like this. On the one hand, they have to admit that the gun owner did the right thing, otherwise they’d be hypocrites for not arresting the shooter. On the other hand, they don’t want to just come out and say that shooting people is acceptable.

Well, we don’t need a stamp of approval from the local brass in order to know that this gun owner did what he had to do to defend himself. It’s truly unfortunate that it got the point that the home owner had to pull the trigger – we’re certain that the event would have gone better for everybody if the robbers had turned tail and fled at the first sight of a firearm. This average citizen protected his property and (more importantly) himself from a group of potentially dangerous thieves.

That’s the tricky thing about stories like this one, isn’t it? We can’t be certain of how bad the crime would have been because it got nipped in the bud. If the home owner didn’t have a gun, the robbers might have just clocked him on the head and stolen his TV. They also might have killed him to avoid leaving a witness. Who knows?

Well, we’re not going to speculate too much about what could have been when we don’t have the evidence to back it up. In any event, we’ll take headlines that sound like “Gun Owner Shoots Home Invader in Self-Defense” over “Texas Man Found Murdered in Home; Police Have No Suspects” any day of the week.