It’s the tenth and final day of Olympic shooting for the 2012 London Olympic Games. We would have liked to end the events with a gold medal, but this year we’ll have to settle for a bronze. 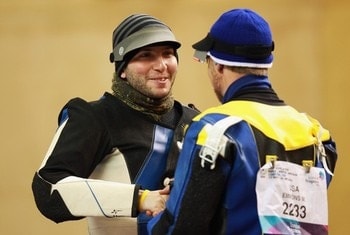 In this event, shooters fire 3×40 shots in the prone, standing, and kneeling positions with a .22-caliber rifle.

Things started off fairly promising for Niccolo Campriani of Italy when he set an Olympic record with a total score of 1180.

That name might sound familiar – Campriani has been doing quite well in the Olympics this year. He secured a silver medal in 10 meter air rifle competition and qualified for the final in the men’s 50 meter prone event.

Matt Emmons of the USA was eight points behind Campriani for second place at 1172. Three people were tied for third with scores of 1171: Cyril Graff of France, Yury Shcherbatsevich of Belarus (what a name!), and Jonghyun Kim of South Korea.

The remaining qualifiers were Qinan Zhu of China at 1170, Ole Kristian Bryhn of Norway at 1169, and Peter Sidi of Hungary at 1168.

Unfortunately, U.S. competitor Jason Parker did not qualify with his score of 1159.

Campriani just barely missed gold in the 10 meter air rifle, but he redeemed himself by setting a final Olympic record of 1278.5 for the gold. South Korea’s Johghyun Kim jumped up into the second place slot for the silver with a score of 1272.5, just a hair’s breadth ahead of Matt Emmons of the U.S. at 1271.3. 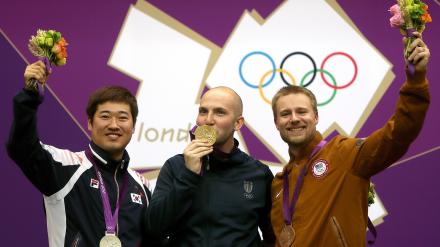 We were hoping that Emmons could have at least brought home the silver or catch up to the record-setting Italian, but a bronze medal is nothing to sneeze at.

Competitors in the trap event shoot at 25 targets across five different rounds, with 10 targets being thrown to the left, 10 to the right, and five straight-away. The athletes can take two shots at each pigeon, but the top six shooters go on to compete in a final round where they fire only one shot each at another 25 targets.

Michael Diamond of Australia dominated the qualification round by shooting a perfect score of 125 and equaling the world record. Fehaid Aldeehani of Kuwait was just one point behind at 124, and there was s tie for third between Jesus Serrano of Spain and Massimo Fabbrizi of Italy at 123 each. 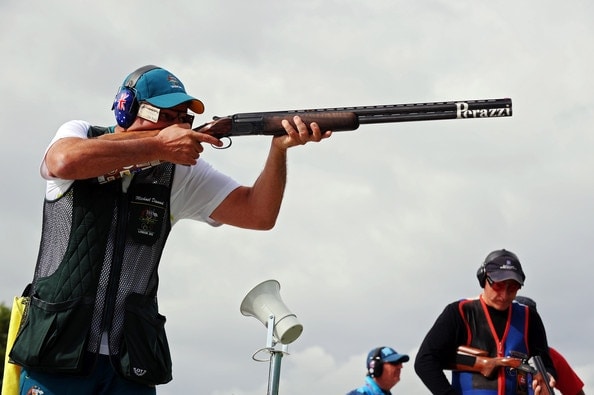 The other two qualifiers were Anton Glasnovic and Giovanni Cernogoraz. Somewhat coincidentally, both of these marksmen hailed from Croatia and achieved a final score of 122.

None of the 34 shooters were Americans.

Michael Diamond really dropped the ball when he shot just 20 targets in the final round, falling into a tie for third place, which he eventually lost in a shoot off. That’s gotta sting.

Giovanni Cernogoraz of Croatia and Massimo Fabbrizi of Italy achieved a final score of 146 to equal the final Olympic record. Cernogoraz trumped Fabbrizi in the shoot-out for the gold. 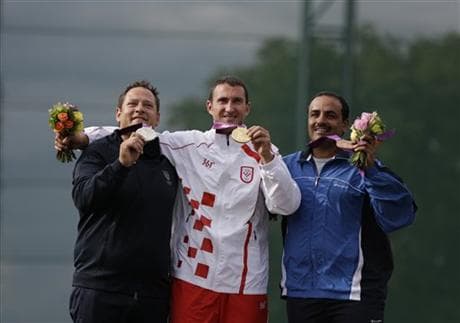 Fehaid Aldeehani of Kuwait beat the unlucky Diamond for the bronze.

Overall, it hasn’t been a bad haul for the U.S. in shooting competitions this year. U.S. athletes secured four medals overall — all of them gold save for Emmon’s bronze today. Here’s the final breakdown:

Now that everything’s been said and done, we’d love to take this opportunity to thank these star athletes for their remarkable performances. They stepped onto the world stage and proved Americans have golden trigger fingers. We can’t wait to welcome them home!