Homeless people: normal people who are down and out on their luck, or menaces to society who are one unasked-for car wash away from getting a pistol stuck in their face?

Well, YouTuber MrColionNoir certainly has an opinion on the matter.

We’ll try not to spoil the viewing experience by telling you which way he leans, but we’ll give you a hint: we’re guessing he doesn’t spend a lot of his time volunteering in soup kitchens.

There’s a phrase you hear every once in a while that goes something like, “I’m not racist, but…” or possibly, “I don’t hate gays, but…” It’s not that there’s anything inherently wrong with those phrases, it’s just that what follows is almost always an incredibly racist or homophobic opinion. You can’t say that you’re not racist and then immediately proceed to say something incredibly racist. That just makes you a hypocrite. 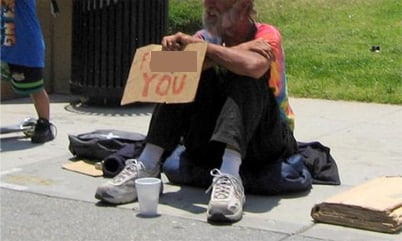 MrColionNoir explains, “I like to consider myself a passionate person… I try to do my part when I can… Now, with that being said, I really hate some homeless people. Not because they’re homeless, but because they make your job as a concealed carrier so much more harder (sic). Because I almost always almost shoot them!”

But let’s not get too far ahead of ourselves. He does raise some really interesting questions about daily life as a concealed carrier. You constantly have to read people and make educated guesses as to whether they’re dangerous or not, because if they intend to harm you then you need to protect yourself before they get too close to you.

So, we can sort of understand where he’s coming from. The way that homeless people act can make it tough to determine whether or not they present a threat to a gun owner. They invade your space out of the blue and they want something from you. Sure, but couldn’t the same be said of door-to-door evangelicals, or high school teens who stand in front of stores and give you coupons? Aren’t they also strangers who approach you with a specific agenda?

The tricky thing about MrColionNoir’s argument is that it doesn’t apply exclusively to homeless people. You could just as easily replace “homeless people” with “strangers who approach you” without losing any meaning. The problem, it seems, is that this guy assumes malicious intent with homeless people and he doesn’t have the same doubts about other strangers.

If he wants to amend his argument a little bit, then we can get behind it 100 percent because he’d pretty much be completely accurate. Yes, it is hard to tell whether a homeless guy wants five bucks or your entire wallet. It is hard to evaluate whether this salesman genuinely wants to sell you insurance, or if he’s using it as a trick to invade your home and murder your family. It is hard to guess whether some random guy is asking for help with his car, or if he wants to abduct you — that’s how Ted Bundy did it. 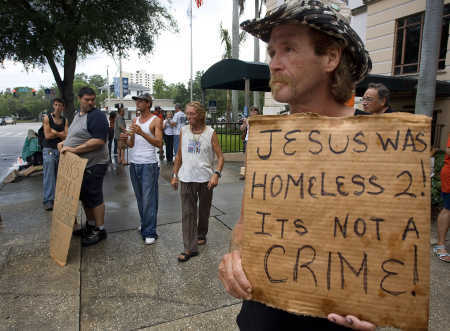 However, singling out homeless people from the larger group of strangers who approach you is exactly what it is – bigotry. MrColionNoir said, “Or how about the guy who walked around the backside of my car and tried to approach me from the driver-side window and realized really quickly how bad an idea that was considering that I saw him in my rear-view mirror and almost introduced him to my Glock 19.” Switch out the homeless person with “some lady handing out pamphlets” and suddenly he sounds like a paranoid nut job.

He tries to rationalize it by saying, “People feel like they can ask you for money anywhere, anyhow, anyplace, at any time with no regard for you whatsoever. They simply don’t care.” Wow, that sounds familiar. Where have we seen that before? Oh, that’s right – every capitalistic society on Earth. We’re curious if advertisers are also constantly under threat of having MrColionNoir point his Glock at them.

Putting aside MrColionNoir’s obvious prejudices against homeless people, we can constructively consider his argument. If you’re packing heat, what’s the line that somebody has to cross before you decide that you have to draw your gun? Is there a bubble of personal space that shouldn’t be invaded, or does it boil down to how strangers act when they’re around you? Whatever the case, we certainly hope that you aren’t constantly on the verge of murdering a specific demographic because of assumptions you hold about them. That type of mentality combined with a lethal firearm will earn you a life sentence.

Should you, as a concealed carrier, constantly threat assess? Or just be aware? What’s your balance?