The New and Improved Bottle Rocket: The RPG-7

Firearm technology has come a long way. Our ancient ancestors had to resort to throwing rocks and dung at their enemies, but after millennia of research and development we finally developed the bow and arrow. From there, we were just a few centuries away from inventing black powder guns.

Since then advances in modern technology has allowed us to launch pumpkins, potatoes, lightning and sound waves. Fairly soon, mankind will finally complete its ultimate objective of being able to shoot every type of object imaginable out of a huge, loud gun.

Well, we’re one step closer to realizing that humanity-wide dream with the invention of the RPG-7 launcher by the Niigata-based Japanese company Marudai-Corp — though the more accurate name would be “RPPB-7” (rocket-propelled plastic bottle), but this gadget is cool enough that we’re willing to overlook that misnomer.

They’ve also managed to combine our universal love of things that go bang with one of man’s other great loves: 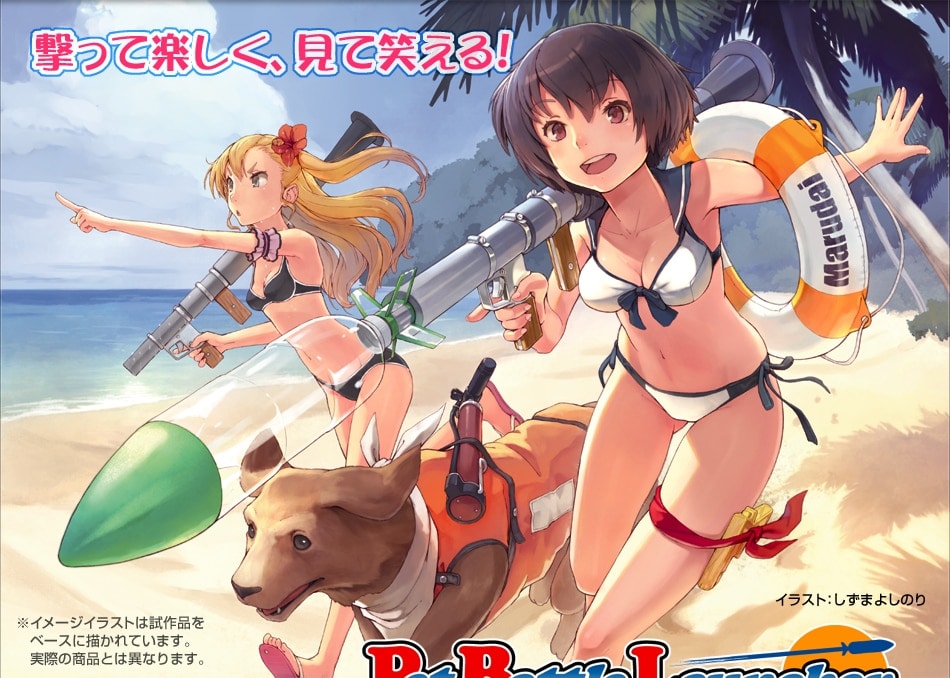 They definitely know their target demographic, don’t they? No, not anime pet owners in bikinis — Japanese guys who like to fire off their rockets.

So, you ready to see this gun in action?

This launcher fires liquid-filled bottles with the help of what appears to be a standard bike pump. Our mastery of the Japanese language is a little bit shaky (i.e., entirely reliant upon Google Translate), so you’ll have to bear with us as we try to work out the details.

The cost of this soda-launching gun is 28,350 yen, or about $351.42, which includes tax but doesn’t include shipping and handling. That last bit about shipping is going to be the tough part – the RPG-7 appears to only be available in Japan, so unless you have a buddy in Tokyo who’s willing to repackage one of these things for you, you might have a rough time getting your hands on one.

The gun does closely resemble a military rocket launcher, but it’s simple enough that you can probably convince local police that it’s just a toy and that you’re not on the way to blow up town hall. Still, we’re not sure if we’d recommend walking down main street with one of these slung over your shoulder. It’s 950mm long (a little more than 3 feet) and only 3 kg (about 6.5 pounds).

The only catch is that you have to be at least 18 years old to order one. The website warns (via dubious translation), “Bottle launcher for toys intended for persons over the age of 18 to persons under the age of 18 cannot be sold.”

We understand their hesitance, even if we have trouble understanding their sentences. It’s probably not a good idea to put these on the shelves of your typical toy store, but at the same time keeping a toy like this out of the hands of teenage boys is just criminal. We think most 14-year-olds would rather have one of these than a girlfriend — and that’s saying a lot.

You’ve really gotta hand it to Japanese ingenuity, don’t you? We’re not trying to get into a debate about Fords versus Toyotas or anything, but this RPG-7 certainly puts the U.S.-made line of super soakers to shame. Bringing this bad boy to a water gun fight will leave the neighbor’s kids waving soaked white flags.

We definitely want one!