Magpul, never resting on their laurels, has developed a new full-length A2 stock and third-generation PMAG. Spotted in the wild by Soldier Systems at a recent photo shoot, these new offerings will make more than a few people happy, and no doubt leave others scratching their heads.

First and foremost is the new MOE rifle-length buttstock. The MOE Riflestock has been a wire-mesh drawing on Magpul’s website for some time, these are photos of the actual product. The MOE Riflestock is fixed like an A1/A2 buttstock, but includes four quick-detach sling swivel mounts, two on either side at the front, two on either side at the rear, one mid-line traditional 1.25-inch sling mount and a sizable storage compartment for whatever you like. 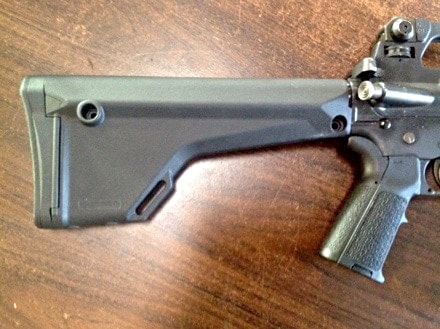 The release date for the MOE Riflestock remains “Summer 2012” and the MSRP at $70. This could promise that “Summer” is actually just around the corner.

In what may be a more major scoop, Magpul is working on a new type of PMAG. Called the M3 for Material, Mold flow, Mold processing, the PMAG M3 combines both PMAG and EMAG features along with more than a few new ones for a design that works across the board with all rifles that use STANAG magazines and have NATO standard magwell, not just AR-type rifles. 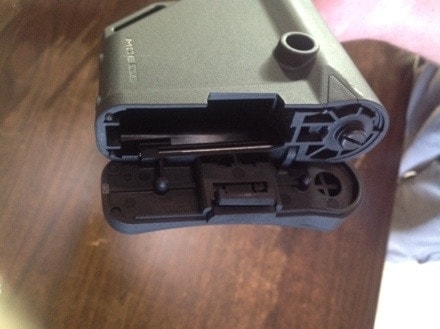 Adhering more strictly to the size constraints of STANAG magazines, the M3 uses a new polymer in addition to the new design. We’ll see how it holds up over time. There are a few new features as well. Starting with an improved magazine catch; it’s been reinforced top and bottom for better wear properties. Another change is the addition of a sharp ledge at the rear of the magazine along the spine. This is an over-insertion stop.

Along with those changes are a modified cutout for a wider variety of bolt-hold-open devices. Inside the magazine is a redesigned follower with enhanced anti-tilt follower and enlarged anti-tilt channel in the magazine. The follower and the feed lips have been reinforced to prevent against bolt carrier wear. 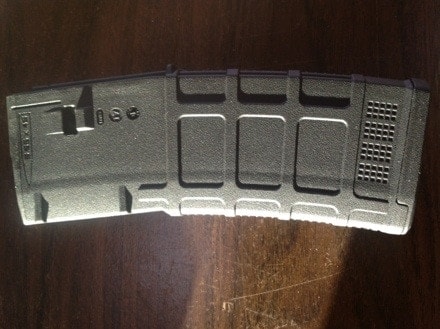 The M3 also incorporates a new, flush-fitting floorplate that uses a different standard than other PMAGs. Magpul intends to produce a Ranger Plate for them in the future. Last of the new M3 changes are a more aggressive grip texture on the front and spine of the magazine as well as molded-in 4-character dot matrix for labeling your magazines.

Finally, one last little mention is an add-on for the recently-launched Remington 870 SGA shotgun buttstock, an optional clip for a rifle sling attachment between the stock and the receiver, but there are no photos as yet. 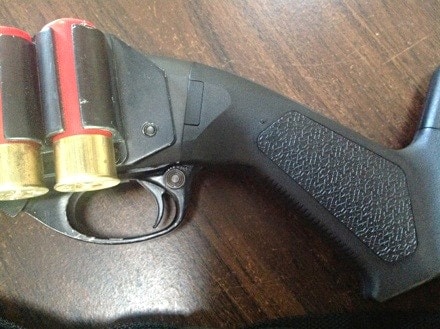 The sling mount will replace the tab between the stock and receiver.

The announcement of a new PMAG does not mean the end of other magazine designs. For now, Magpul intends to continue to produce existing PMAG and EMAG models. Of course, whenever Magpul launches or even hints at a new product, we have to ask, where are the 40-round PMAGs?