The mayor of Washington D.C. blasted a pro gun organization for advertising its gun ownership safety courses in the downtown area.

The advertisement, a 30-by-60 foot billboard at 12th Street and Massachusetts Avenue in Northwest, depicts a woman holding a shot-out target with the caption, “Hey D.C. – It’s time for your first shot.”

The sign references the National Shooting Sports Foundation’s introductory shooting program, “First Shots” – a course designed to teach new gun owners about the laws and how to safely use firearms.

Mayor Gray told reporters that the billboard was “irresponsible.”

“To promote the use of guns in the city I think really is just anti-safety,” the Democrat Mayor said.

The NSSF, the firearms industry trade association, responded to the Mayor’s criticism. 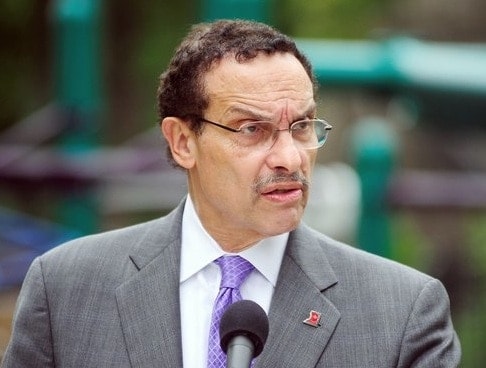 “His reaction is sadly predictable — a knee-jerk, anti-gun reaction to anything firearms,” NSSF General Counsel Larry Keane told the Washington Times. “I don’t see how the billboard or people going to a First Shots program to learn about firearms safety threatens the public safety of Washington or in any way encourages anyone to violate the draconian laws of D.C.”

Keane then added, “We have a suggested summer reading list for the mayor: the Bill of Rights and the Heller decision.”

But not everyone shared Gray’s concerns.  One of his Democratic peers, city council chairman Phil Mendelson, thought the sign and the program it represents was a good idea.

“I see nothing wrong with promoting gun safety,” Mendelson told The Washington Times. “If this is a program which helps people use a firearm responsibly then that’s a good thing.”

First Shots classes will be taught at various shooting ranges in Maryland and Virginia from Aug 24 to 28.  No classes will be held inside the District because it is – as the intrepid investigative reporter Emily Miller has pointed out – illegal to carry a gun outside the home.

Currently, new gun owners in the District have no local range or venue for learning how to shoot.  Instead, under a new law, the District makes them watch a 30-minute online video on gun safety produced by the Metropolitan Police Department (it used to be that gun owners were forced to take a mandatory training course outside the District if they wanted to own a firearm within the district – an obvious conundrum that the city council finally changed).

“The hands-on course with instructors and the chance to operate a firearm at a shooting range are better than watching a video,” Keane told the Washington Times.

Washington D.C. is one of the few cities that still prohibits concealed carry for law-abiding citizens.  On a tangential note, robberies are up 19 percent and assaults with a firearm are up 9 percent, according to the Times.