At the beginning of the 19th century the United States only had a handful of states, steam power was growing even though manufacturing was still budding, and firearms were still somewhat primitive. But then in 1811 John H. Hall designed the first breechloading firearm to be adopted by the U.S. military.  While it had many flaws, the design did have one very important contribution – the ability to use interchangeable parts.

The Hall’s purpose was to speed up the loading process for the U.S. soldiers and, in turn, give them a higher rate of fire in battle. It worked kind of like a revolver – well, a single shot revolver that doesn’t revolve.

The Hall has a chamber that is separate from the rest of the barrel.  Its single chamber flips up so it can be loaded from the muzzle end. Technically speaking, the Hall is not a breechloader, it’s actually a short barrel or chamber that is retractable and, when closed, lines up with the longer barrel of the rifle.  This process did speed up the loading process.  The standard issue infantry weapon of the time the M1816 flintlock musket could be loaded and fired three times in a minute while the Hall design was capable of eight to 10 rounds.

Originally, Halls were flintlocks, but in 1841 they were changed to percussion cap and most of the flintlocks were converted.  An original flintlock Hall rifles are seen fairly rarely today.

Hall patented his design in 1811, but it wasn’t until 1819 that the U.S. Army picked it up.  Harper’s Ferry, VA (later West Virginia), was the site of the United States Armory and Arsenal. Established in 1799, the arsenal at Harper’s Ferry was the main manufacturer and innovator of firearms in the U.S. at this time.  It was here that Hall set to work manufacturing his firearm.

The most important accomplishment of Hall’s work was developing the methods to make firearms with interchangeable parts, as he documented in a letter to Secretary of War John C. Calhoun in 1822:

I have succeeded in an object which has hitherto completely baffled all the endeavors of those who have heretofore attempted it – I have succeeded in establishing methods for fabricating arms exactly alike, and with economy, by the hands of common workmen, and in such manner as to ensure a perfect observance of any established model(…)

This alone was a very important step in the evolution of the American factory system that impacted not just the firearms industry, but manufacturing as a whole.

The Hall rifles were well received by the soldiers in the field. The mounted troops – Dragoon and Mounted Rifles – were especially fond of the breechloader seeing as it was a lot easier to load while atop a horse than a traditional muzzleloader. They saw service during the Seminole, Blackhawk and Mexican-American Wars.  In addition, at the start of the Civil War they were issued by both sides more as a stopgap measure, but were quickly replaced by newer designs.

Although Hall rifles were designed with new and innovative techniques at the time, they were far from perfect. 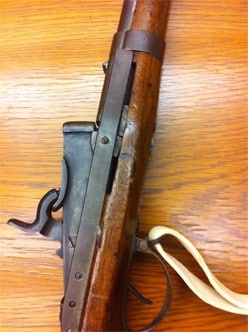 The main problem was that the gap between the chamber and the barrel on the Hall leaked, meaning hot gasses from the burning powder would escape and cause a drop in pressure.  Ballistics tests performed by the War Department in 1843-44 show about a 200 to 300 foot drop in velocity compared to the a muzzle loading rifle in the same caliber.  (If you are interested in 19th century ballistics testing check out this link:

The “fire” leakage also caused other problems. When the rifle is fired the gap is only about 10 to 12 inches away from the face of the shooter.  There were also reports that the gasses would find their way through the lock and burn the shooter’s trigger finger (A good friend of mine has a reproduction flintlock Hall built from a kit made by the Rifle Shoppe and the first time he fired it he got a nice little burn on his finger – still has the scar, too).

There were about 50,000 rifles, muskets and carbines produced using Hall’s breech loading design. And from time to time they can be found for sale on the auction sites, but, like all firearms, condition is the key.  They usually range from $1,200 to about $4,000.

The example I examined can be found in the collection of the Old State House Museum in Little Rock, AR.  It was manufactured in 1832 and is in fully functioning condition. I would not be afraid to shoot it – well, if I was wearing leather gloves and a face shield.

John H. Hall’s breech loading design paved the way for more successful breech loading designs that would eventually turn into cartridge firearms, most notably the Spencer and Sharps designs. The idea of interchangeable parts sounds simple to us now, but in the early 19th century this was truly revolutionary.