Guns have two main purposes: self-defense and entertainment such as hunting and shooting competitions. You don’t typically see a lot of overlap between the worlds of self-defense and hunting. You’d probably get arrested if you tried to carry your shotgun or hunting rifle around town so that you could use it for self-protection, and bringing your compact pistol out into the woods for a day of hunting is a little bit silly.

In rare cases, however, the worlds of hunting and self-defense clash with bruising force. Such was the case in Fertile, Minnesota, where 66-year-old Mark Christianson had a close encounter with a wild buck.

It all started two days before the incident, Grand Forks Herald reports. Christianson was near his shed when he spotted a male deer. Christianson recalled, “He was 8 feet away, and instead of being scared he came right up to me. I went inside, and he stuck his nose right up against the window. Then he banged his antlers against the wall.”

Christianson tried to retreat back his house but the deer followed. Christian dove into a 1992 Bonneville that he kept in his yard and waited for the deer to wander off.

That was odd encounter, certainly, but it wasn’t something that was worth worrying over. Deer are a fairly common sight on Christianson’s property, so he and his wife brushed it off as nothing. “We sometimes have 17 or 18 deer in the yard here,” Christianson’s 65-year-old wife, Judy, said, “but we have a hard time getting a picture. You open the door a little and — phfft — they’re gone. They’re usually so sensitive.” 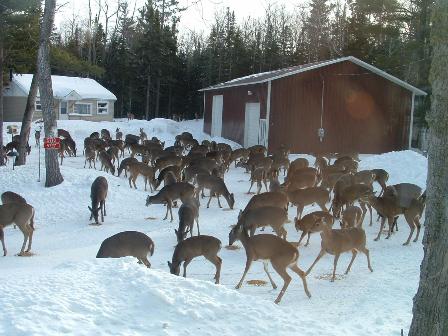 But that wasn’t the last they would see of this pugnacious deer. The next day, Judy went out to hang clothes and saw the buck feasting on their crabapple tree.

The third day was when the antlers hit the fan, so to speak.

The Eternal Struggle of Man vs. Nature

Christianson went out to spray his soybeans when he had another encounter with the deer — thiis time, the deer meant business. The deer charged at Christianson and struck him with its hooves.

Christianson described the battle, “He was pummeling me, standing on his hind legs and hitting me with the front ones. He hammered me good, rapid fire, and I thought, ‘Well, this isn’t good.’ I wasn’t winning, so I grabbed him and tackled him and we both went down on the ground.”

Man, what a guy. A lot of people in that situation would probably think, “I gotta get outta here!” Christianson is made of tougher stuff than that – his first reaction was to wrestle with it.

Mark Christianson the Deer Wrestler managed to disentangle himself and make a break for the house. “He got me! He got me!” he yelled to his wife. 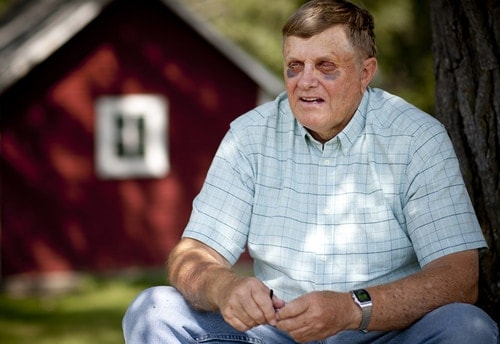 Judy was understandably terrified and confused: “Mark was dripping blood all over, and his ear looked like it had been tore off. He was shaking and trying to load bullets into his gun. I didn’t know what to think.”

Christianson came back for round two, but this time he was fully armed. “I gut-shot him where he was, then saw he went down at the edge of the hill over there,” he said, indicating a copse of nearby of oak trees. “I got him a couple more times there.”

Christianson claimed that the deer sounded sick, so the Minnesota Department of Natural Resources and the Norman County Sheriff’s Office shipped the deer’s corpse off to the University of Minnesota Veterinary Diagnostic Laboratory to give it an autopsy. They ruled out rabies and Lyme disease, but they did find a few parasites in its liver.

Blane Klemek, the wildlife supervisor, said, “but it’s unclear whether that would explain the animals unusual behavior. It’s an odd one. Deer are normally afraid of people.”

You know, it’s possible that this deer wasn’t sick at all. Maybe it was a Jeffrey Dahmer of the deer world and just wanted to beat the crap out of some humans. Well, it definitely shouldn’t have picked a fight with Mark Christianson, gun owner and undefeated deer wrestling champion. 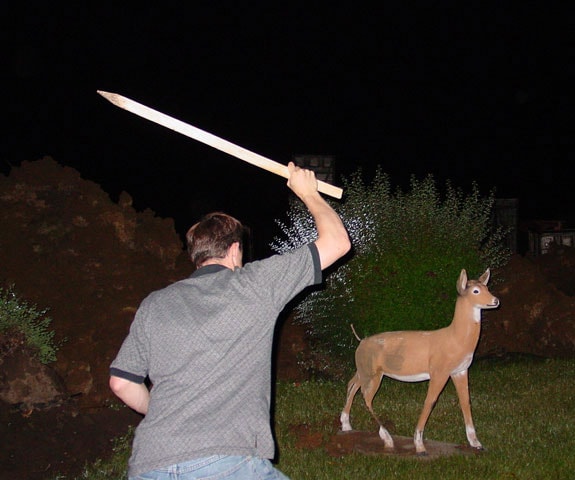 The deer has learned its lesson out of the ordeal (a little bit too late for it to matter), and so has Christianson. When asked how he would handle another aggressive animal on his property, Christianson responded, “I wouldn’t wait three days to get my rifle.”