Designed and built by DRD Tactical, the Paratus-16 is a dream gun. It is a semi-automatic takedown rifle chambered in .308 Winchester with a folding, telescopic buttstock. The whole rifle packs up into a tactical briefcase not all that much bigger than a lunchbox. Designed for military spec-ops and clandestine law-enforcement snipers, the Paratus-16 is also available to the public at large.

It is loosely-derived from AR-pattern rifles, but eschews the traditional buffer and buffer tube for a recoil system inside the modified upper receiver. The upper has been extended at the front for the quick-detach barrel and separate, free-floating handguard. The lower receiver has also been extended at the rear for the Magpul PTS folding stock’s locking mechanism and has a cutout for a left-side charging handle.

“We developed [the Paratus 16] in 7.62NATO/.308 caliber, and the AR platform, being so popular, led us to stay with a direct gas operated system. There are two utility patent applications filed, one on the internal recoil system and the other on the quick-takedown barrel design. The internal recoil system eliminates the buffer tube, spring and buffer from a traditional AR15 design, hence allowing it to have a folding stock.”

The Paratus-16 doesn’t require any tools for takedown, and can go from briefcase to shooting in under a minute pretty easily. Check this out:

As you can see, this is one boss operator’s gun, part Masada ACR, part Stoner rifle, and still entirely original. The Blaze has the remaining specifications, which include: 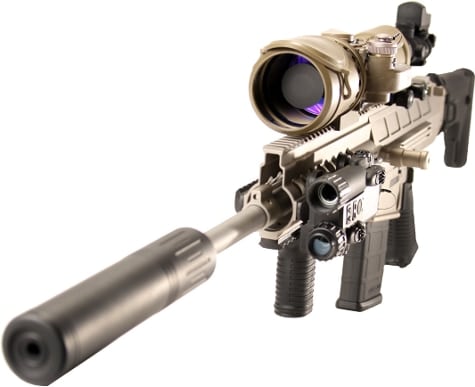 However, you do have to expect to pay up-front in order to be this intensely tactical. The Paratus-16 has a $5,615 price tag.

The Paratus is also available in an even-more compact package, the Paratus-SBR-12. As the name implies, this short-barreled rifle, regulated by the NFA, comes with a 12-inch barrel and is suppressor-ready. In addition to all the features it shares with the Paratus 16, the SBR comes with an AAC muzzle break for quick-detach silencers and a Noveske adjustable gas block to toggle between suppressed and unsuppressed fire. The Paratus-SBR-12 runs a little more, $5,995. Not counting the tax stamps, suppressor and optics.

Not only is this ridiculously cool, we’re doubly impressed by how original these rifles are. We’ve seen sniper/designated marksman rifle takedown guns before, but DRD Tactical has got our full attention.