Former Gov. Eliot Spitzer got a 1590 on the SAT exam.  He went to the best schools in the country, undergrad at Princeton University and then on to Harvard Law School.  After school, Spitzer bounced around for a while, holding positions in both the public and private spheres.  Eventually, he was elected Attorney General of New York and, following that, became Governor.

Paul M. Barrett is an accomplished author and investigative journalist.  His most recent work GLOCK: The Rise of America’s Gun was a New York Times bestseller.

Like Spitzer, Barrett attended Harvard Law School.  In addition to being an adjunct professor at New York University Law School, Barrett holds the position of managing editor and senior writer at Bloomberg Businessweek. The point?  Both of these men are extremely well educated and have enjoyed great success in their lives.  But on the issue of gun control, one gets it, the other one doesn’t.  There’s a question of why that is, but first, here’s their relative positions on gun control:

“The attack in Oak Creek, Wis., was motivated by a right-wing racist agenda, one that blames “others” for the problems of the sick individual who pulled the trigger” Spitzer wrote in a Slate.com article. “Yes, people pull the trigger — but guns are the instrument of death.”

Overall, Spitzer sees gun control policy as a necessary means to reduce gun violence and stop sociopaths from killing innocents.  Barrett, on the other hand, sees gun control as being largely futile.

“It’s perplexing and infuriating to gun-control advocates that as a political matter, there is little chance of new national restrictions on firearms,” Barrett wrote in Bloomberg Businessweek piece.

“Politics aside, what’s really dumbfounding many liberals is that no amount of legislative tinkering would stop or even seriously slow the sort of evil psychotics who shoot innocent people in movie theaters, shopping malls—or a suburban Sikh temple.”

Here, one should examine what is perhaps the key difference in their reasoning, Barrett uses facts and a sensible assessment of societal realities to construct his arguments and Spitzer relies on, well, it’s not really clear.  Nowhere is this more apparent than their thoughts with respect to semiautomatic weapons.

Spitzer believes that politicians should “use government’s power in the marketplace — as the largest purchaser of guns — to force the companies we buy from to act responsibly.”  In other words, the federal government and the City of New York would refuse to buy “any weapons or ammunition from companies that do not agree to pull semiautomatics from their stock and refuse to produce magazines with more than 10 rounds other than for sale to the government.”

In reading this, one has to question whether Spitzer even knows what a semiautomatic firearm is relative to other ‘traditional’ guns.

Barrett explained this in his article, “a semiautomatic handgun, or pistol, is as ordinary, traditional, and basic as a firearm can be. The 9 mm model used in Milwaukee fires rounds the same size as a .38 caliber revolver.”  Does Spitzer realize this? 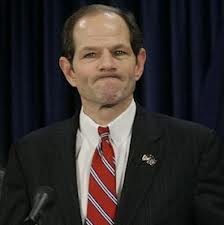 Then Barrett backs up his claim with an incontrovertible fact:

We tried banning assault weapons from 1994 through 2004, when the ban expired. The law had no significant effect on crime rates.

What is Spitzer’s response to that?  As mentioned, he is an intelligent man; one would imagine that he would have to account for this fact.

It should be mentioned that Barrett also discussed why a ban on high-capacity magazines would be ineffective (a) they’re ubiquitous and short of confiscatory measures that would undoubtedly lead to an insurrection, there’s no way to pull them out of circulation and (b) carrying multiple 8 to 10 round clips can be equally deadly, e.g. the gunman in Wisconsin.

It goes with out saying, but Spitzer should read Barrett’s work.  He truly gets it.  And his credibility, as far as being and unbiased and competent journalist, is off the charts.  And, if that’s not enough, he writes for Bloomberg (as in NYC Mayor Michael Bloomberg, the “clarion voice” of the modern gun control movement, Spitzer’s own words.  Of course, Bloomberg should also pay more attention to Barrett)!

It’s very difficult to understand why smart people just don’t get it.  The facts are there for all to see.  It certainly raises the question as to what extent people, intelligent, ivy-league educated people, are blinded by politics?