Death of an HK P2000: Would You Reconsider Polymer?

During a U.S. Border Patrol training session near Lordsburg N.M., an unnamed USBP agent took a fall, resulting in the premature demise of one Heckler & Koch P2000 service pistol. The Loadout Room has photos from the scene. These are pretty raw, unedited photos. You may not want to see them, particularly if you’re an HK fan.

“A Lordsburg BPA (Border Patrol Agent) fell off his ATV while in training today. The fall was precipitous and required a short visit to the hospital.  There was some collateral damage, the BPA’s P2000 handgun. It is believed that his CSB, given the location behind the gun, may have created the torque necessary for this result,” reported a local USBP field office anonymously.

The damage to the gun is readily apparent. The frame is snapped in two right at the narrowest point up by the P2000’s tang, where it is thinnest at the thumb rest. Even the retention holster is severely disfigured.

All this brings up the old debate. Perhaps it’s time for a national dialog. Is it time to reconsider our nation’s love affair with polymer-framed pistols?

It’s clear that this fall was serious, requiring a trip to the hospital for the agent involved. It was an unlikely occurrence, just a perfect storm of plummets, but we have to ask if a steel or even alloy-framed pistol would not have survived a similar tumble. 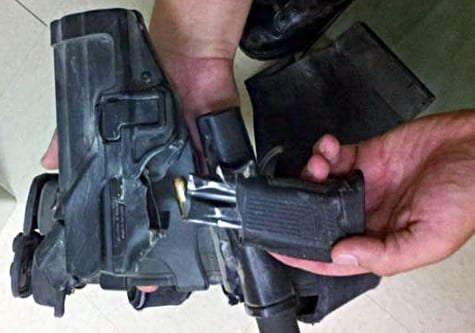 We can only speculate that, while it would almost certainly have been damaged, an all-metal gun could have taken that impact and kept on going.

The other side of the coin is that this P2000 could have acted as a break-away barrier that protected the unnamed border agent. An all-metal gun would have likely survived the fall, but what would that have meant for the BPA? Broken bones? Worse? There’s a reason small-of-the-back-carry has gone out of favor and that’s because when you land on your back with a gun between the ground and your spine, well, something’s gotta give.

We can’t undo the damage done to this service pistol, or any of the agents affected by this tragedy. Shouldn’t we use this then, as an opportunity to discuss and perhaps reconsider the use of certain materials used in our firearms?