NRA To Renew Push for Open Carry in Florida

Undaunted by past failures, the National Rifles Association is angling to legalize open carry in the Sunshine State, setting its sights on the 2013 session of the state Legislature.

The executive director the Unified Sportsmen of Florida, an NRA state affiliate, Marion Hammer told the Tampa Bay Times that the bill would allow those who currently possess concealed carry permits, to carry openly in public.

The bill is necessary, Hammer argued, because police continue to harass concealed carry holders when they accidentally expose or flash their guns in public, despite the passage of legislation to eliminate this phenomenon.

“We are going to address the problem of law-abiding gun owners exercising their Second Amendment rights, because they’re being harassed,” Hammer said. “The goal of the new bill will be exactly as it was in 2011 — to protect law-abiding people who have a license to carry.” 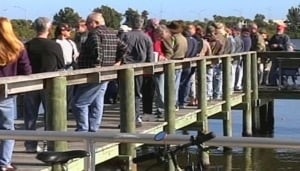 Speaking to that point, Sean Carama, the executive director of the gun rights advocacy group Florida Carry, told the Times that he has “77 complaints from bearers of concealed weapons who say they have been treated inappropriately by law enforcement officers since last year’s open-carry bill ended in a stalemate.”

One example is 23-year-old Dale Norman, a Fort Pierce resident who got slapped with a misdemeanor after he accidentally exposed his .38 caliber handgun in public.  A bystander saw Norman’s gun and reported him to police.  In his defense, Norman argued that his shirt was simply snagged beneath the holster (for more on this click here).

Open Carry in Florida is also a matter of practicality, argues Eric Friday, a Jacksonville attorney who represents Florida Carry.

But given recent events, the mass shootings at a Sikh temple in Wisconsin and a movie theater in Colorado, discourse on guns and gun control has reached a fever pitch– a reality that Friday believes puts his organization’s beliefs on display.

Those responsible for defeating the 2011 open-carry bill, mainly members of the Florida Sheriffs Association, say they are unlikely to change their position as open carry puts the public at risk, creating opportunities where gun thieves can easily target unsuspecting gun owners and confusing scenarios where police would have trouble differentiating law-abiding citizens from gun-wielding criminals.

“I think we would still have the same concerns we had with that bill last year, if it’s identical,” Casey said. “We need to see it.”

Looking ahead, it will be interesting to see how this battle for open carry plays out in a media that is now, at least as much as it’s ever been before, hyper sensitive to gun rights and gun laws (keep in mind all the coverage of Florida’s controversial ‘Stand Your Ground’ law).

What’s your take?  Will Florida finally re-legalize open carry (remember, open carry was legal up until 1987)?