It’s been said that good writers borrow, and great writers steal.  While most assume this maxim is meant to be taken creatively (one uses his imagination to build upon the work of another), Time columnist and CNN host Fareed Zakaria seemed to have taken it literally when drafting his article “The Case for Gun Control.”

In the article, which calls those who are skeptical of the efficacy of gun control “un-American” and “unintelligent,” Zakaria plagiarized an entire paragraph from Jill Lepore’s popular pro-gun control piece, Battleground America: One Nation, Under the Gun, which was published in the New Yorker this past April.

Adam Winkler, a professor of constitutional law at UCLA, documents the actual history in Gunfight: The Battle over the Right to Bear Arms in America. Guns were regulated in the U.S. from the earliest years of the Republic. Laws that banned the carrying of concealed weapons were passed in Kentucky and Louisiana in 1813. Other states soon followed: Indiana in 1820, Tennessee and Virginia in 1838, Alabama in 1839 and Ohio in 1859. Similar laws were passed in Texas, Florida and Oklahoma. As the governor of Texas (Texas!) explained in 1893, the “mission of the concealed deadly weapon is murder. To check it is the duty of every self-respecting, law-abiding man.”

As Adam Winkler, a constitutional-law scholar at U.C.L.A., demonstrates in a remarkably nuanced new book, “Gunfight: The Battle Over the Right to Bear Arms in America,” firearms have been regulated in the United States from the start. Laws banning the carrying of concealed weapons were passed in Kentucky and Louisiana in 1813, and other states soon followed: Indiana (1820), Tennessee and Virginia (1838), Alabama (1839), and Ohio (1859). Similar laws were passed in Texas, Florida, and Oklahoma. As the governor of Texas explained in 1893, the “mission of the concealed deadly weapon is murder. To check it is the duty of every self-respecting, law-abiding man.”

Once news got around, Zakaria had no choice but to admit wrongdoing.  On Friday, he issued an apology for lifting Lepore’s work. 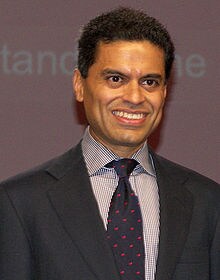 “Media reporters have pointed out that paragraphs in my Time column this week bear close similarities to paragraphs in Jill Lepore’s essay in the April 23 issue of The New Yorker,” Zakaria said in a statement.

“They are right. I made a terrible mistake,” he continued.  “It is a serious lapse and one that is entirely my fault. I apologize unreservedly to her, to my editors at Time, and to my readers.”

Time has accepted Zakaria’s apology and, as punishment, has suspended his column for one month, “pending further review.”

“What he did violates our own standards for our columnists, which is that their work must not only be factual but original; their views must not only be their own but their words as well,” Time Spokesman Ali Zelenko said in a statement.

CNN was also miffed by Zakaria’s mental “lapse,” announcing that it, too, will suspend him until the matter has been fully reviewed.

“He wrote a shorter blog post on CNN.com on the same issue which included similar unattributed excerpts,” the CNN statement said. “That blog post has been removed and CNN has suspended Fareed Zakaria while this matter is under review.”

An incident like this one makes one wonder how seriously the mainstream media examines the issue of gun control.  Do investigative journalists and columnists like Zakaria really research the issue?  Do they consider all sides of the argument before sitting down to write their piece?  Or do they just conform to a popular narrative and parrot what someone else has written?