The Colt Single Action Army belonging to non other than infamous outlaw Bob Dalton of the Dalton Gang is up for auction next month at the Rock Island Auction Company’s September 7-9 firearms auction, along with almost three thousand other rare and historically significant handguns, rifles and even Gatling guns.

Dalton’s SAA revolver belongs to the Gateway Collection, one of four outstanding collections being presented at the upcoming auction. It is a beautiful factory-engraved black powder Colt revolver taken from Dalton’s dead body, who died in a shootout in Coffeyville, Kan., on Oct. 5, 1892.

The revolver was acquired from a public auction house nine months following the raid that ended the Dalton Gang. It was in Coffeyville that the Dalton Gang attempted to one-up their rival the James Gang by robbing two banks on the same day. Notorious for shooting and killing innocent bystanders, the Gang was immediately identified as they split into two groups for the heist. 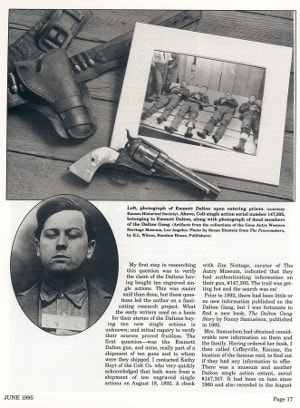 They were immediately surrounded after the robberies, the townspeople having armed and readied themselves while the Gang was busy. The ensuing shootout left four citizens and four of the five Dalton Gang dead, Bob Dalton, Grat Dalton, Dick Broadwell and Bill Power. Emmett Dalton was shot 23 times and survived to testify at trial; he was sentenced to life in prison and was eventually pardoned after serving a 14-year term.

Since the day Dalton was killed, his revolver has been owned, tracked and cataloged and has unparalleled provenance and is in fantastic condition. In addition to having exquisite factory engravings, the Single Action Army comes with mother of pearl grips that show no signs of wear. It is expected to fetch about $350,000-$550,000. It is one of two Dalton Gang Colts, with another similar Single Action Army belonging to Emmett Dalton that is estimated to bring in $125,000-$175,000.

The Colts are just some of many. “The collection also features an original factory documented 16-inch Colt Buntline, an original factory documented 10-inch Buntline, an excellent and original Winchester ‘1 of 1000’, factory engraved Henrys, a rare highly-desirable U.S. Colt 1890 Gatling gun, and the list goes on and on to include over 20 original Colt flattop target Single Actions and Bisley’s as well over 150 other first generation Colt Single Action many factory engraved and high condition examples.” 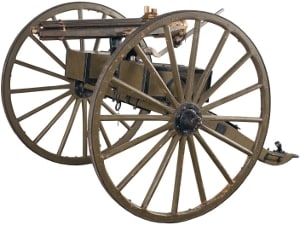 And that’s just the Gateway Collection. This auction will feature antiques and arms from three significant others, the Michael Barrett Collection, the Howard “Doc” Janecek Collection, and the William Ashby Collection, among many other unnamed collections.

The total count of objects up for auction number 2,956, with firearms and other military memorabilia and regalia dating from the 17th through the 20th century. You can see each and every item up for auction here, although it will take you a while to thumb through them all.

These guns are amazing examples of how, for good or for bad, guns will always be an amazing part of our culture.