What does 'Effective Range' Mean (and what does it mean to you)?

I have been asked many times by other shooters what the effective range of my gun is and even though I know it’s not polite to answer a question with a question, I usually respond by asking them ‘what effective range is’ just to hear what they say. Well, what exactly is ‘effective range’ and what does it mean in the grand scheme of firearms, shooting and self-defense?

The effective range of a particular firearm and cartridge, also known as the maximum effective range, is an average of how far the bullet will travel before it hits the dirt and the actual practical range it can be used at to engage a target. To put it bluntly, it is the range where you can shoot and expect to hit what you’re aiming at with the bullet having enough punch to do the job.

For instance, a box of .22 long rifle may tell you the range of a round is well over a mile but you certainly would not be taking a shot at that length even if you could see a target that far and expect to hit it. The question is, how do you figure out what the effective range of your particular firearm is?

One “shooting truth” I heard long before I even started hunting was that if you wanted to kill a deer with a .30-30 you had better do it under a hundred and 50-yards. For years, I thought as many else still do that the .30-30 was no good at a distance longer than that, but I (and you if you still think it to be true) was dead wrong.

The tale of William Lewis

The one time scout, tracker, Pinkerton and then hired gun Tom Horn proved deadly accurate with his Winchester Model 1894 rifle chambered in .30-30. 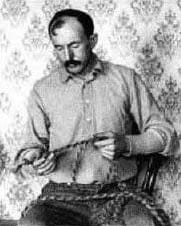 In August 1895, Tom Horn was in Wyoming working for the cattle barons doing whatever it took to convince the local cattle rustlers that their business was hazardous to their health. One such thief was William Lewis, a man who was pretty much universally despised by his neighbors.

Lewis had been warned once for getting too close to Horns’ bovine wards with a bullet, shot by an unseen gunman which landed right at the cattle rustlers feet. Regardless, Lewis did not get the message to vacate and when he failed to leave the area, he was greeted with a .30-30 slug right in his chest followed by two more bullets, one to his side and one final round that knocked him flat on his back. The coroner put the distance at some 300-yards.

While the .30-30 is certainly considered a brush cartridge, it is not just for short-range long guns. With a decent rifle with a scope mounted and a pointed bullet say of about 165 grains (load the round with the pointed bullet in the chamber and the tubular magazine with round or flat nosed bullets) and the brush gun will definitely stretch its legs.

Chambered in a single shot H & R Handi-Rifle or one of the occasional bolt-action .30-30’s changes the nature of the old round altogether. I personally know of two people who killed whitetail deer with their .30-30 rifles at a distance of near three hundred yards; both were skilled shots and knew exactly where the bullet would hit at that distance. It can be done and at a farther range than advertised.

Now turning to handguns, how many times have we read or heard that a handgun is no good at more than a dozen yards or so. I can tell you as a student of long range handgun shooting that someone who practices with a handgun, no matter the caliber, can stretch the range past what most consider even possible.

In 1999 I was in college and at the same time I was trying to rid my grandfather’s pond full of some pesky beavers. I had set up some traps around a dam to try and contain their growing numbers. One day while checking my traps, I surprised a pair of beavers intent on clogging a drainage culvert.  The two went under faster than a German U-boat after seeing a Navy destroyer upon seeing me but there’s a little trappers wisdom I knew about when it came to beavers: if you are quiet and patient beavers tend to not stay hidden for long.

I was carrying my Colt Woodsman, which I had already used to shoot one beaver earlier in the season. The first beaver popped up about thirty yards out, and I fired a couple of shots that fell short before the third struck the beaver in the midsection. The follow-up caught the beaver in the side of the head. A few minutes later the second beaver popped up about forty yards out. I put a steady hold on him and I caught him in the right side as he made his way to a bank. The beaver went under but came right back up only a second or so later and that was as much as he moved again in this life. I put the range at about 50-yards.  To this day, some call my shot a fantasy when I tell it and while no one was there but me that day, nobody could argue that my grandfather’s pond was down two beavers.

One of the reasons I was able to make that shot and stretch what some would consider the effective range of that Colt pistol is that I knew what I could do. When I first began shooting with a handgun I knew nothing of ballistics outside of the basic muzzle velocities and a few 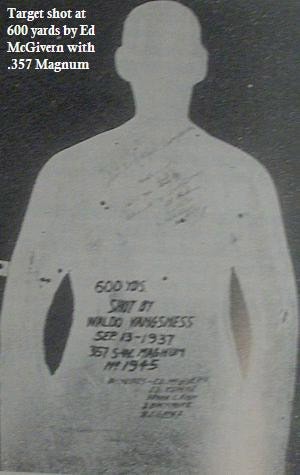 other cursory facts. I also really had no one to tell me differently so I shot my handguns at ranges most would think silly. I thought nothing of practicing at one hundred yards with my .44 Magnum Smith & Wesson and when I missed I kept practicing until I could hit the target consistently, something I still practice.

The key word is practice, you certainly can shoot a handgun farther than 25-yards, even on game but you must use common sense along with that skill. Will a .357 Magnum kill a deer at one hundred yards?  Certainly. Ed McGivern, perhaps the greatest handgun shooter who ever lived, could accurately hit a man sized target repeatedly out to a staggering 600-yards.  But that doesn’t mean you should try killing a deer that way.

A good scoped handgun the effective range of say a .44 Magnum revolver is farther than you might think, but use your head (and that means more than just looking up data in a book). You need to learn the effective range of your own gun and that comes with a combination of practice in the field and knowledge of the round you are shooting.

So when you need to know what the effective range of a particular round is, just remember that it isn’t a set number on the page of a book.  It differs with each shooter and the gun they are using. For me a .22 handgun is certainly capable of taking game out to 50-yards.  The bullet still has the power for small game as long as the shot is perfect but for someone else with the same gun the distance might be half that or even less.

In the same vein, those two rifle shooters who killed deer at the 300-yard mark with a .30-30 are far superior with that rifle than I am, but I don’t feel too much anxiety over this fact.  One of those men had been using his particular rifle for over 30 years at the time he shot that deer and before he hung that gun up for the last time he shot that rifle almost exclusively for almost 60 years. He knew what that gun and that round could and would do instinctively and that knowledge and skill-set is what separates the good shooters from the greats.