Last year was a veritable love fest for the 1911.  Now I’m a big fan of Browning’s masterpiece—especially when made by Colt.  But Colt Manufacturing made more than just Peacemakers and 1911s.  They brought back the Mustang, finally.  Now it is high-time they reissue some of their other classic firearms.

The Colt Vest Pocket is one of the most modest and most stylish automatic handguns.  It is tiny, at 4.5-inches long, and weighs less than a pound.  The lines echo the other Colt autos of the day, lines now associated mostly with the traditional 1911.  In terms of performance, the Vest Pocket is only slightly more effective than an actual pocket on a vest—but I’m not advocating using it for self defense. 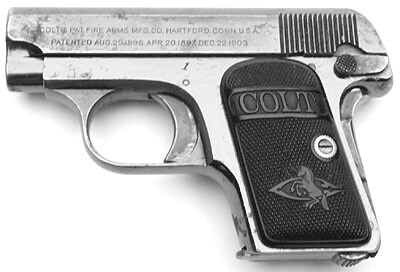 The 1908 should be worn like jewelry.  True, the 1908 could serve a last ditch back-up gun, or a purse gun for those little jeweled handbags.  But it is more of a conversation piece.  Yet they are still in demand.  The Baby Browning had a long production run and similar guns are still being made by Precision Small Arms.

Colt made a .32 ACP pistol in 1903 (and for many years after) that had several permutations.  In 1908, Colt introduced a version of the gun chambered in .380 called the Colt 1908 Pocket Hammerless.  The gun comes in just under seven-inches long, and weighs 24 ounces empty.  This gun is still a favorite for concealed carry.  With a four-inch barrel, the 1908 is accurate, and (when dressed up in nickel and pearl) a good looking gun. 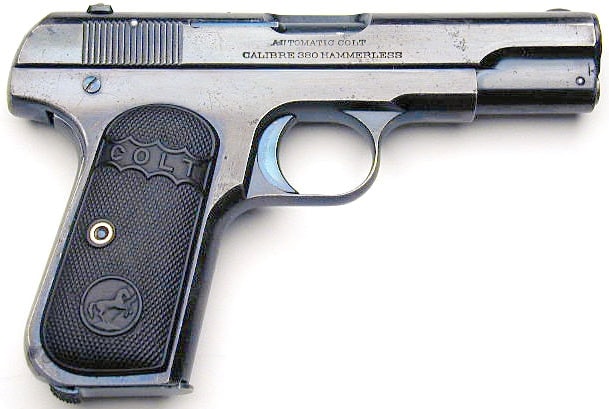 The 1908 was thin, easily concealable, and reliable.  While the originals still work well, the time has come for two reissues.  I’d like to see a new .380, and, if I were in charge at Colt, I’d have my engineers working on a Pocket Hammerless in 9mm that could compete with the Kimber Solo.  It would appeal to shooters who prefer steel over polymer.

Ruger understood the appeal of the Woodsman.  Their Mark series .22 pistols evolved from these prewar .22s.  Colt made some versions of the Woodsman that had long, pencil thin barrels.  As the name suggests, the Woodsman was great in the woods.  Some of these early guns could rival the accuracy of .22 rifles of the day.

And if you believed the pulp literature, the .22 Colt was the mark of a true assassin.  Raymond Chandler, in his story “Red Wind” writes, “The drunk’s gun was a .22 target automatic, with a large front sight. It made a couple of hard snaps and a little smoke curled-very little.”

While some of the blundering meatheads blasted away with 1911s, the most dangerous villains were those who knew how to shoot (even when drunk)—and knew that a .22lr slug in the heart would do the trick without making too much noise or mess.

The .38 Super is a decent round.  It was originally conceived as an automatic version of the .38—but the original .38 ACP just didn’t provide the punch, so (like the .357 magnum a few years later) engineers beefed it up.  The .38 Super is a solid performer.  While the bullet is smaller and lighter than the .45 ACP bullet (a .38 super comes in around 130 grains), it made up the lack of mass with speed.  From a five-inch 1911, speeds topped 1,200 fps.  Modern loads are even hotter. 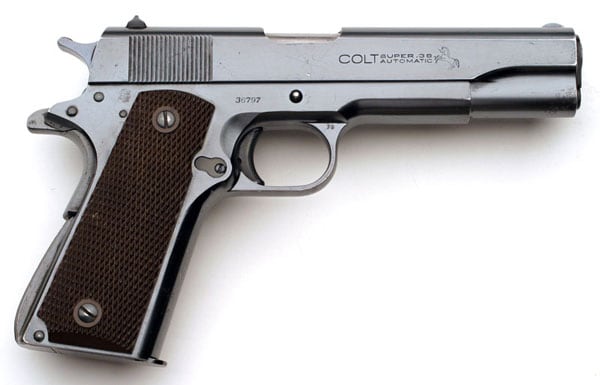 The .38 Super is the perfect choice for those awkward times when your assailant is shooting at you while seeking shelter behind the door of a 1931 Ford Model A.

And that’s the market I think Colt needs to tap.  Collectors.  There is a lot of information for collectors at ColtAutos.com and it’s an excellent reference for those interested in old Colts.

Why did Colt stop making these cold steel pistols?

In most cases, they were obsolete or unfashionable.  The .25 ACP was obsolete from the start.  The .380 ACP fell out of fashion when the .38 snub-nosed revolvers took over the concealed carry market back in the 1950s.  The .38 Super gave way to the 9mm, which offered more manageable recoil.  But the Woodsman is still a mystery to me.  It was made into 1977.  I think Ruger ate away at the Woodsman’s customer base with the Mark series pistols, and the more expensive Colt brand simply couldn’t hold onto the market.

But there are lots of us out there who want a genuine Colt.  Yet we can’t afford an original.  They command every imaginable price, depending on their condition.  If I had an original in pristine condition, I wouldn’t want to shoot it.