If we put you in front of the Guns & Ammo Gunsmith store located in North Augusta, South Carolina, and asked you to guess what had happened, you’d probably go with a terrorist bombing attack or a horrible car accident. Your first guess probably wouldn’t be a robbery.

With an entire wall demolished, glass shards littering the floor, tire marks across the linoleum, bullet holes in the walls and blood stains on the counters, this humble gun store looks like a war zone more than anything else. But the property wasn’t the only thing damaged in the attempted theft — one of the alleged robbers was killed and the two others were hospitalized.

How could a simple smash and grab become so violent? We’ll tell you the full story, but for that we have to start from the beginning.

Last May, thieves broke into a gun store in Calhoun County, South Carolina, by wrenching the bars off of a door with an automobile. Calhoun Country Sheriff Thomas Summers became interested in two suspects during the following investigation, one of whom was 27-year-old Franklin Jerome Robinson.

Robinson was charged with receiving stolen goods, possession of a stolen vehicle and falsifying a vehicle identification number. He was released on a $100,000 surety bond, but that wasn’t the last time that authorities would cross paths with Robinson.

Just last Thursday, Robinson and two other accomplices, K’Raven Goodwin, 20, and Eddie Stewart, 30, allegedly attempted to steal guns from the Guns & Ammo Gunsmith. This time, though, Robinson escalated from yanking down bars to demolishing entire buildings – one of the men drove a van through the store wall.

The 4 am robbery was not fated to last very long, however, as the gun store owner and his wife were sleeping in an apartment connected to the back of the gun store. The owner, Stephen Bayazes Jr., 57, woke to the sound of the car crashing through the wall and the silent alarm. He grabbed his AR-15 and went to investigate.

Bayazes told investigators that one of the men shouted, “kill that [expletive],” forcing Bayazes to preemptively open fire against the intruders. He completely emptied his 30-round magazine and retreated into the back apartment to reload, but by the time he came back the fight was already over.

The van was pulling out, but the wounded Goodwin was left behind. Goodwin was later transported to the Georgia Health Sciences University (Augusta is right on the South Carolina – Georgia border), where he was pronounced dead due to multiple gunshot wounds.

The two other alleged robbers fared better than Goodwin, but not by much. They reportedly drove less than five miles to a nearby waffle house where they sought emergency aid for their gunshot wounds. Details of their injuries have not been released, but police are prepared to press charges once the men are well.

The police have reclaimed all of the stolen merchandise, which was stashed in the automobile, though they have not revealed whether or not the men were armed during the alleged crime. 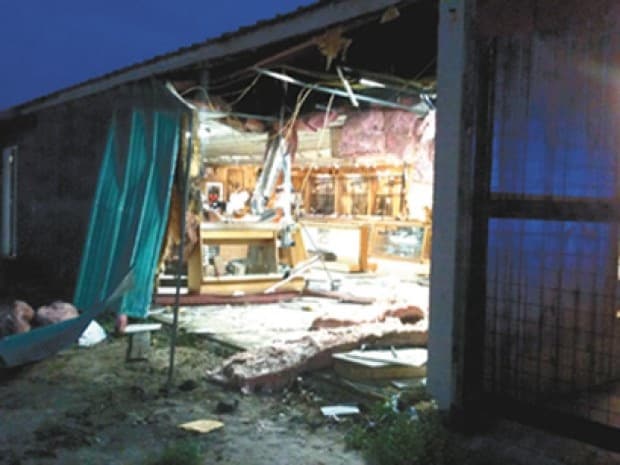 Picking Up the Pieces

Back at Guns & Ammo Gunsmith, Bayazes and his wife were lucky – if you can call experiencing such a violent robbery lucky. They were not injured and they’ve already had a construction crew begin repairing about $15,000 in damages to the store.

At the very least, they won’t have to worry about an impending legal battle hanging over their heads. The police do not intend to press charges — if anything, they were sympathetic to Bayazes. Aiken county sheriff Sgt. Jason Feemster said, “If someone is breaking in your home or business, you have the right to defend yourself and not retreat.”

Bayazes shared with WRDW news that he regretted that he was forced to pull the trigger on other human beings, but he “did what he had to do.”