Those of us who call the Golden State home can rejoice today.  That is, thanks in large part to grassroots organizations such as Gun Owners of California and the Calguns Foundation, the bill (SB 249) created to ban bullet buttons and a slew of features and accessories for semi-auto rifles is dead in the water – at least for this year.

News of this major victory for the California gun community came by way of the state’s Assembly Appropriations Committee, which announced that the bill was pulled from the committee’s Thursday agenda and will not be heard by lawmakers.  No hearing means no vote and no vote means that the bill cannot be passed into law.

In a statement the sponsor of the bill, Senator Leland Yee, expressed regret that his pro-gun control measure was removed from the schedule (the actual deadline for the bill is this Friday, if the committee doesn’t vote on it by then, which is almost certain now, it cannot be reintroduced until the 2013 legislative session). 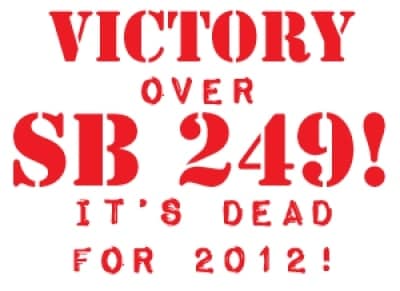 “I am deeply disappointed that the bill is being held by the Appropriations Committee,” Yee said in the statement released by his chief of staff Adam Keigwin. “My greatest fear is that another senseless act of violence will happen before the loophole is closed.”

The consensus is that the SB 249 died for two reasons (a) the groundswell of opposition coming from gun owners and gun rights advocacy groups and (b) the money it would take to push the bill through the legislative process, estimates put the cost at around $400,000 – precious dollars that the state doesn’t have.

While being pleased with the outcome after months of lobbying, petitioning, and getting the word out about SB 249, gun groups wanted to remind gun owners that while the battle has been won, the war is not over.

After thanking its members as well as those who worked to defeat SB 249, Gun Owners of California published the following statement on its website:

Be aware, that this will not be the last we hear of this bill.  The liberal agenda will continue their efforts to strip us of our Second Amendment rights and we need to build our forces, now more than ever!

If you have been following the news, alerts, videos, posts, and petitions as distributed and organized by Gun Owners of California, and are not yet a member, we urge you to join GOC today! The fight is not over!

The GOC is absolutely correct; the fight isn’t over.  Yee has said so himself.

“Despite the gun lobby’s efforts to derail common sense legislation, I will not give up this fight,” he said in his statement.

Bearing this in mind, California gun owners should continue to put the pressure on state lawmakers to not only oppose future incarnations of SB 249, but to outright change the law that requires a semi-automatic rifle’s magazine to be “fixed” – the reason why bullet buttons exist in the first place.

Seriously, why do we – I’m speaking as a Californian – put up with these pointless gun laws?