On Monday, the GOP-led House filed a civil lawsuit that seeks to have President Obama’s claim of executive privilege over internal Justice Department documents relating to the fatally flawed gunrunning program Operation Fast and Furious rejected by a federal court.

In a statement released on Monday, House Speaker John Boehner addressed the matter, explaining how this moment came to pass.

“By stonewalling Congress and ignoring a contempt order, the Justice Department has left the House no choice but to take legal action so we can get to the bottom of the Fast and Furious operation that cost border Agent Brian Terry his life,” Boehner said.

One will recall that in late June, the House cited Attorney General Eric Holder with contempt of congress for failing to provide those internal DOJ docs.  The measure was passed by a bipartisan vote of 255-67, marking the first time in U.S. history a Cabinet official was placed in contempt.

“After providing — then retracting — inaccurate information to Congress, Attorney General Holder has gone to extraordinary lengths to block access to subpoenaed documents and deny the efforts of the Terry family to get the truth,” Boehner continued.

“The White House has been complicit in this effort to hide the truth by making executive privilege claims that have no merit, which is why today’s action is necessary,” Boehner said, noting that the decision to slap Holder with a contempt citation made it clear that the “Obama administration owes the Terry family and the American people the truth.”

For clarification, executive privilege is a power reserved for the executive branch, in particular the president, that allows the office to resist subpoenas and other interventions from the legislative and judicial branch.

Overall, the civil suit is angling to accomplish three objectives, as pointed out by the Associated Press:

—The executive privilege claim by Obama be declared invalid.

—Holder’s objection to the House records subpoena be rejected.

—The attorney general produce all records related to the Justice Department’s incorrect assertion in early 2011 that gun-walking did not take place.

The lawsuit, itself, recapitulates much of what Boehner said in his statement (Holder was also held in criminal contempt of Congress.  But the DOJ has already announced that it will not pursue criminal prosecution against its leader). 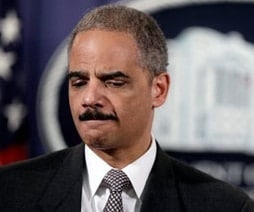 “Portentously, the (Justice) Department from the outset actively resisted cooperating fully with the committee’s investigation,” the lawsuit said.

“Among other things, the department initially declined to produce documents; later produced only very limited numbers of documents in piecemeal fashion; refused to make available to the committee certain witnesses; and limited the committee’s questioning of other witnesses who were made available,” it said.

It’s not clear what, if anything, will result from this lawsuit – a compromise between House Republicans and Eric Holder?  An appeal by the losing party (almost a given)?

However, one thing is for sure, it’s going to take time before this matter is settled.  With election season in full bloom, one can imagine that the Obama administration will do what it can to delay proceedings until after November.

Meanwhile, the family members of slain Border Patrol Agent Brian Terry will have to continue to wait for answers.