The Steyr GB: The Proto-Wondernine

The Forgotton Weapons blog got a hold of photos of one of gun history’s most successful failures. The Steyr GB, produced for a limited time in the U.S. by LES Incorporated as the Rogak P-18, was revolutionary in more ways than one.

Not only was it a truly high-capacity 9mm handgun, feeding from 18-round magazines, the highest at the time, it used an inspired gas-delayed blowback operation that used the barrel as a gas piston. The GB, German for gas bremse, or gas-braked, had a flanged, ringed barrel. The flanged portion was ported at the front allowing gas from the barrel into the barrel bushing which braked the slide’s blowback momentum. This allowed the GB to fix the barrel to the stainless steel frame, resulting in a very accurate handgun.

Designed in 1968 as a modern replacement for Austria’s aging military sidearms, Steyr licensed production of the GB to the LES corporation, who produced them in Illinois for the consumer market throughout the 1970s. However, the American firm did not manufacture them to the correct tolerances, and the Rogak P-18 suffered major reliability problems. Steyr sued LES and eventually halted their production in 1980, at which point they took over their manufacture.

That same year, the Austrian military issued a formal request for small arms manufacturers to develop a replacement for their World War II-era Walther P38s. With production back under Steyr’s control, the GB was poised to be the latest and greatest handgun to go into service.

Unfortunately for Steyr, they weren’t the only company out innovating. 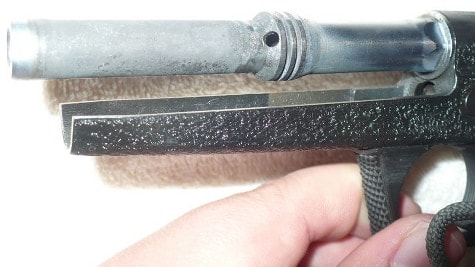 “Steyr expected the GB to be a shoo-in for the Austrian military contract, as it was well understood that a domestic Austrian design would receive preferential consideration. However, a no-name bayonet supplier named Gaston Glock appeared out of nowhere and won the military trials with his polymer-framed G17.

“Steyr certainly hadn’t expected that, and they proceeded to enter the GB in the 1983 US military pistol trials—where it lost out to the Beretta 92 despite many good qualities. Steyr’s management must have found all this rather unbelievable (losing to a fellow Austrian is one thing, but Austria being beaten by the Italians?) and fell back to marketing the gun to police and civilian buyers. Sales trickled in slowly, but it never gained a major official departmental sale and by 1988 they threw in the towel and stopped manufacturing the guns.”

1988 was the last year the GB saw production. This steel-framed, double-action gas-delayed blowback pistol was at the right place at the right time, had its teething problems sorted out, and still didn’t make it very far at all. Only about 20,000 of these guns were made, never seeing commercial or military success. 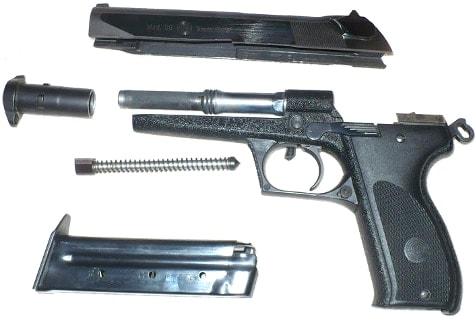 While disappointing for Steyr, the company did move on and is without a doubt a player on the national and international fronts. Steyr would eventually poach Glock designer Wilhelm Bubits who would go on to design the Steyr M-series of handguns, which have been a success in both commercial and military/police circles. Steyr’s AUG rifle is without a doubt the most popular bullpup rifle in the world, and their Scout rifle set a new standard for firepower on the move.

Still, we can’t help but wonder what things may be like today if the GB took the stage instead of fading into relative obscurity. Would Glock have thrown in their towel and made steel-framed gas-delayed blowback pistols today?