Everyone wants to know, how does this GOP young gun stack up against the competition?

With respect to fiscal matters and the economy, many believe Ryan’s experience and expertise is unparalleled.  After all, he is the chairman of the House Budget Committee and the author of the famous (or infamous, depending on one’s political persuasion) Ryan Plan or as it’s less commonly known, “Roadmap for America’s Future.”

The economy is still in a precarious position, as such, Romney’s selection of a budget hawk further telegraphs his overall campaign strategy, i.e. the election will be won by the party that has the best plan to strengthen the economy and balance the federal budget.

While this theory may be true, by and large voters cite economic issues as their number one concern, some feel that both Romney and Ryan’s ostensible lack of experience with foreign policy and military matters leaves the GOP ticket vulnerable (It should be noted that neither Romney nor Ryan served in the military, nor did Obama or Biden for that matter).

Unsurprisingly, on this front, criticism from democrats and those on the left has been particularly sharp and biting.

“I think his (Ryan’s) experience as a vice presidential candidate is thin; or for a future president and commander-in-chief, it’s virtually absent,” Tim Roemer, a former Democratic congressman and ambassador to India, told the National Post.

Also quick to the draw was Stephanie Cutter, Obama’s deputy campaign manager, who questioned Romney’s judgment and voiced skepticism his ability to handle foreign affairs.  Specifically, Cutter pointed to Romney’s comments about London’s preparedness (or lack thereof) to host the Olympics and his intimation that Palestinian culture was the reason for their economic woes.

“I think that was proof positive that Mitt Romney doesn’t have the judgment necessary to be America’s commander in chief. And whether Paul Ryan can help him with that, we’ll see,” she told the CBS’s Face the Nation. 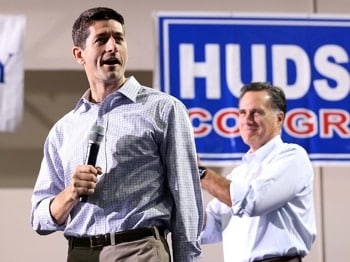 Naturally, Republicans defended Romney and Ryan, arguing in some cases that a fresh approach on foreign affairs is what this country needs.

“I think it is an advantage that they are not part of the current mess,” former House Speaker Newt Gingrich said on CBS’s “Face the Nation” Sunday.

“Ronald Reagan defeated the Soviet empire decisively in eight years,” Gingrich continued. “So I would rather have Romney and Ryan rethinking everything than have the current team continue — look at the disaster in the Middle East, unrest in Libya, Egypt, Gaza, Syria, Iraq, Iran, Pakistan, Afghanistan.”

In the end though, Romney and Ryan will stick to the game plan, play up their economic agenda and show how the budget and the economy directly impact national security.

Last year, while giving a speech at the Alexander Hamilton Society, unknowingly Ryan gave us a good idea as to the type of national defense and foreign policy rhetoric will be hearing on the campaign trail from the two GOP contenders.

“If there’s one thing I could say with complete confidence about American foreign policy, it is this: Our fiscal policy and our foreign policy are on a collision course, and if we fail to put our budget on a sustainable path, then we are choosing decline as a world power,” Ryan said.

“A safer world and a more prosperous America go hand in hand,” Ryan continued. “Economic growth is the key to avoiding the kind of painful austerity that would limit our ability to generate both hard and soft power.”

In short, everything hinges on the relative strength of the economy.  The question: Are they right?