Ruger has been busy filling orders and coming up with new products this year, but this month they have announced several new and interesting limited distributor-edition firearms that have drawn quite a bit of attention. Their most recent announcement is a new six-shot Bisley-style Super Blackhawk chambered in .44 Magnum.

There are several differences between this and Ruger’s other Bisleys. Of note is Ruger’s satin stainless steel finish not common to single-action revolvers, as well as the short 3-3/4-inch barrel. Despite the shorter barrel, Ruger’s Bisley still weighs in at a hefty 44 ounces, with plenty of mass to keep the recoil down.

The end result is a .44 magnum that’s easy to handle and even carry. .44 Magnum can be loaded to incredibly-high energy levels, upwards of twice the power of some .357 Magnum loads. This promises to be a fun gun at the range and a good woods gun in a pinch. 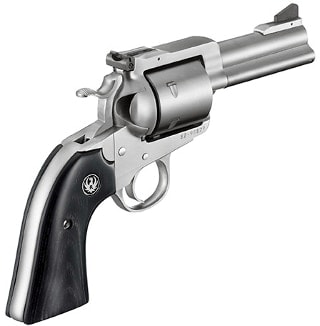 Other features that make this one attractive .44 are the black laminate grips inlaid with Ruger’s logo, an adjustable rear sight and replaceable pinned front sight and a slick non-fluted cylinder. It also delivers on the little Bisley details, like the wide, flat trigger and curvaceous serrated hammer.

Like Lipsey’s Jason Cloessner says, “If you are looking for a ‘little big gun’ for the woods, this is the one for you.” You can see their product page and other details about the limited-edition Stainless Ruger Bisley .44 Magnum on Lipsey’s product page here.

The original Bisley revolver was a special-edition Colt Single Action Army, and was quite successful. Introduced in 1894, Colt’s Bisley was named after Bisley, a Surrey-county village in England famous for their shooting ranges, and was chambered in a variety of calibers, including .32-20, .38-40, .44-40, .41 and .45 Colt and .450 and .455 Eley.

Although marketed as a target revolver, the Bisley was a popular sidearm because of its superior ergonomics, controls and adjustable, interchangeable sights.

Ruger’s standard Blackhawk Bisleys are available with 7.5-inch barrels, have a deep blue finish and are chambered in .44 Magnum and .45 Colt. Ruger also makes a full-size New Blackhawk Bisley Hunter with a stainless steel finish.