Just yesterday, Guns.com posted an article about a gun-owning Pennsylvania man who stopped a criminal who was in the middle of a stealing spree. The gun owner got slapped with a recklessly endangerment charge, which has sparked some debate over when it is and isn’t appropriate to point a gun at someone in relation to safety.

Well, the fickle Lady of Coincidence has smiled upon us. A similar crime took place the day after in a town outside of Orlando, Florida. As a short disclaimer, we’re not saying that these two crimes are perfectly identical, but they’re certainly similar enough to warrant a cautious and reasonable comparison. We’re talking state laws and situations. 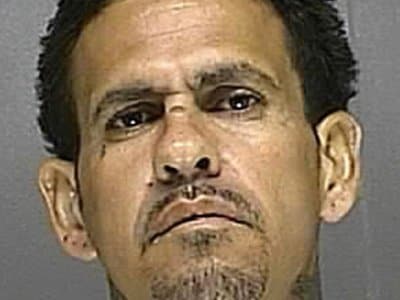 Just after dusk yesterday, Sanford Ketcham, a 73-year-old crossing guard, spotted a burglar rummaging through his pickup truck, which was parked in front of his Deltona home. He did what most sane people would do — he called the cops.

After notifying the 9-1-1 dispatcher, though, he did something a bit unorthodox. He grabbed his gun, stood out on his front porch and ordered the burglar to stay there until the police arrived.

The only catch? It wasn’t a real gun. Ketcham was wielding a very realistic-looking BB gun shaped like a pistol — actually, it looked a lot like a Glock — though the alleged thief Walter Medina, 38, had no way of knowing that.

“I’ll shoot him right through the windshield!”

The dispatcher, to his credit, did his best to diffuse the situation. He said, “Alright, alright, sir. This is a recorded line. You don’t want to be making threats on a recorded line.” 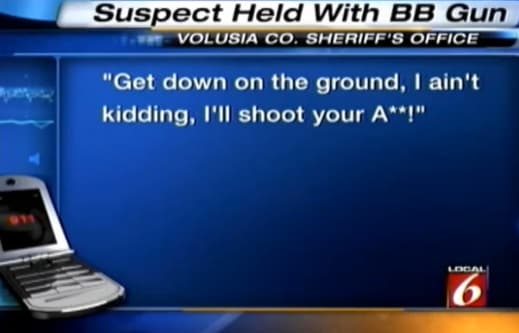 The dispatcher wasn’t the only one who bought Ketcham’s bluff though. While Ketcham kept the gun on him and continuously yelled threats, Medina did as he was told and remained on the scene until deputies arrived minutes later. The cops arrested Medina and charged him with burglary and petty theft.

The deputies also demanded that Ketcham drop his weapon; he immediately complied. Ketcham later told police that the BB gun wasn’t even loaded, so the whole situation was about as dangerous as a harmless hunk of black plastic. In the end, there was no mention of Ketcham being charged with a crime.

Lee Roy Bumford, the gun owner of yesterday’s piece, wasn’t so lucky. He was charged, but there are a few dissimilarities between the two cases. First off, Ketcham caught a burglar in his own truck rather than somebody else’s. Ketcham also called police and used a fake gun instead of a real gun, whereas Bumford did not call police and used a real firearm.

So are the cases of Bumford and Ketcham identical? Certainly not. Are they close enough to make you wonder what line you have to cross before you stop being a helpful citizen and become a dangerous vigilante in the eyes of the law? Definitely.

In an interview with Beacon Online News, Ketcham made a statement suggesting that the crucial difference might all boil down to personal property. “That is my property, my personal property,” Ketcham said, referring to his 2007 Chevrolet truck, “You don’t need anything in that truck. That’s the way it goes.” In addition, Ketacham said he was also trying to protect his wife who was inside their home.

You have to wonder if Bumford had stumbled upon the burglar when he was breaking into his own car, would he have gotten off without any charges?

As a matter of fact, one reporter of WFTV brought up that point. She asked another reporter, “What if (Ketcham) had grabbed a real gun, shot this guy, could he have gotten into trouble?”

The answer, “We’re told the state Stand Your Ground law and the Castle Doctrine provide some broad protection for people who act out against people committing crimes on their property, but you know, it really does depend on the circumstance in every case.”

What do you think? With two separate but similar incidents of a citizen pointing a gun (real or fake) at a burglar, now’s the perfect time to start a debate. How far does a gun owner have to go to stop a crime before he becomes a criminal himself?