How Will the Heizer DoubleTap Change Things?

If you haven’t heard already, Heizer Defense, a subsidiary of Heizer Aerospace in Missouri — has begun making pistols.  They are small, thin and double-barreled (over-under).  If you believe all of the buzz, Heizer’s new DoubleTap is going to change the way carry concealed weapons.

I’m not so sure.  The DoubleTap will change things, yes — but it isn’t going to change the way we think about concealed carry handguns.

Like most everyone else, I haven’t had the chance to put the DoubleTap though its paces.  But  the gun seems familiar.

The philosophy behind the DoubleTap reminds me of Mossberg’s 464 Tactical Lever Action. 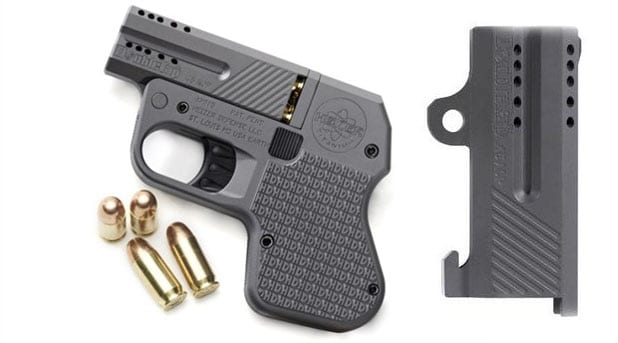 And the derringer, despite being useful, never really took off.

That’s not to say it won’t be extremely popular with a small audience.  But the DoubleTap ranges in price from $499 (for an aluminum frame with no barrel ports) to $799 (for a titanium framed DoubleTap with ports).  There will be many shooters who prefer this as a back up to their back up gun.  A third option.  But most of us only ever carry one gun, if that.  And for us, the DoubleTap is not enough, and a bit pricey.

The Springfield Armory XDS in .45 ACP is larger.  The XDS is 0.8-inches longer, 0.5-inches taller and 0.235-inches wider.  Less than an inch in each direction, and the XDS will hold six, without the hassle of a reload.  But the XDS is clearly designed as a back-up gun, or a dedicated concealed carry weapon.

Let’s be clear about this.  While the DoubleTap is small, it is not a micro compact.  The width seems to be the strongest selling point, as it will drop inside a pocket more gracefully.

Heizer knows that the size is relative.  And people will figure this out.  That isn’t to say that people won’t buy the gun, or buy into the philosophy.  But I think the Heizer DoubleTap will be a bridge to something else.  The new double action only trigger (patent pending) might be the most the most lucrative thing Heizer has to sell. 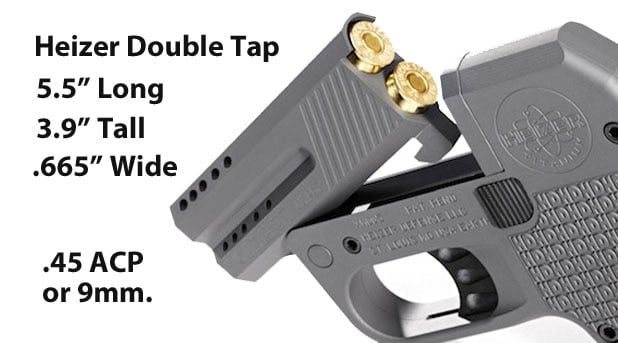 What they have done is utilized the thin profile of a .45 ACP barrel (minus the width of the slide) and made that the defining feature.  The next step will be a new automatic mechanism that will maintain the slim width, but incorporate a new type of action.   Something that moves off the back of the barrel, like a Luger, perhaps.

Metcalf, in the G&A article, concluded by saying that Heizer “will sell a million of these guns.”  Maybe.  Dick Metcalf knows more about guns, and much more about the business than I do.  But  here’s my bet.  Heizer’s gun will hit the market and sell out fast.  All of the orders will sell out.  But the fervor will settle.  Once people can actually handle the DoubleTap, it won’t seem so small.  Once they shoot it, they’ll realize how tricky it can be to reload from the strip in the handle (which holds two extra rounds).

I could be wrong.  I love the idea and can’t wait to get my hands on a DoubleTap.