To Shoot or Not to Shoot? Find Out in this Police Firearm Training Sim

For some police forces, the single most valuable tool for training officers might actually be a glorified video game. This Firearms Training Simulator gives members of the San Luis Obispo Sheriff’s Department in central California an opportunity to hone their skills in realistic life-or-death situations. 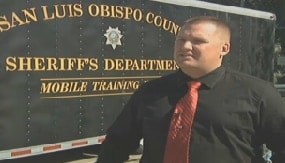 But the focus isn’t so much about accuracy and getting a high score – it’s more about making the best moral and legal decision in every encounter to ensure that nobody catches a bullet unless it’s absolutely necessary.

The sheriff’s department opened up the simulator to reporter Keith Carls of KCOY News to give the public a taste of the split-second decisions law enforcement officers have to make every day.

The simulator acts a bit like a miniature movie theater with the windowless walls blocking off outside lights and distractions. A projector mounted onto the ceiling provides a movie-like image of actors playing out a mock encounter with the police. Unlike a movie, though, the story on the screen can change slightly based on the actions of the police officer. Firing the gun will cause the target to fall to the floor from the bullet wound.

Its main purpose may be as “a judgment tool and a decision-making tool for deputies,” said Deputy Robert Crout, but watching the person you shot double over in pain (even if he is just acting) should help to remind police officers of the devastating, life-changing effects of pulling the trigger.

Giving it a shot

Crout put Carls through the simulator to see how well he performed. For a guy who’s probably more accustomed to hot leads than hot lead, this reporter seemed to do a fairly good job of navigating through these dangerous encounters.

The first encounter was a domestic abuse response involving a couple of people who clearly didn’t want the police officer in their home. Things got tense when the man reached behind the wall and pulled out a wallet. A more skittish officer might have preemptively pulled the trigger, but Carls kept his cool.

The second scenario involved the same set of actors, but this time the man reached for a hidden pistol rather than a wallet. It appears that the actor pulled off two shots before Carls put a fake bullet into him to neutralize the threat.

Speaking of fake bullets, we should take a quick detour in this article to talk about the gun. They intentionally use guns that are “as close to real life as possible,” explained Crout, with only a few minor differences. First off, the gun — which looks like a SIG — fire bullets with compressed air to ensure the safety of everybody involved, and the gun also has a threaded barrel in order to accommodate a laser device that sends data to a nearby computer.

Carls went through another set of encounters, but these involved a group of teenagers loitering in a parking lot. The first run-through involved a teenage girl drawing a knife – certainly threatening, but not quite terrifying enough to warrant punching a few digital holes through her. The same teenager whipped out a gun during the second encounter, prompting Carls to pull the trigger and send the other teenagers fleeing into the night. 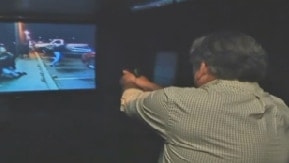 Crout explained that simulations like these can provide vital decision-making training for officers so that they will be well-prepared once they hit the field.

“We’re teaching these officers, you never know, you can never automatically expect it’s a wallet or automatically expect it’s a firearm,” he said. “You have to feel what the intent is at that time and what a reasonable person would feel in that situation, if you feel that a reasonable person would expect to be threatened with a firearm than you are authorized to use deadly force.”

Crout emphasized that you can’t apply the same logic to every single situation because no two encounters are ever identical. What works in one case might be an absolutely terrible decision in another case.

It’s easy to give cops a hard time, but you’ve gotta admit that they sometimes have a rather unenviable job. They literally face the possibility of being shot during every second of their days and when they do pull the trigger there’s a good chance that they will rightly face media and public scrutiny for it.

Opening up the doors to their training simulators and getting this kind of information out there can help remind civilians that it’s not always obvious when a stranger may attack. When a person is that type of situation, he or she may only have fractions of a second to analyze and react, so it’s best to be prepared to make the right decision.

Now, all we need for them to do is to open up the training simulator to the public during off hours and charge admission. Revenue that doesn’t come from tax dollars and a program that can help make average gun owners more cautious and reasonable in a deadly shooting scenario? Yes, please.