Surgeons have incredibly high-stress jobs, but the most experienced brain surgeon has got nothing on Lt. Cmdr. James Gennari of the U.S. Navy Nurses Corps, who received a Bronze Star after helping to remove a live rocket-propelled grenade from a Marine’s leg. Yeah, you read that right – the whole time, the grenade was just one twitch away from exploding and sending out a blast powerful enough to destroy a car.

It was just another day for Gennari in an Afghan battle zone when a helicopter brought in a Marine who had a rocket-propelled grenade lodged in his leg. The wound was as gruesome as it was dangerous, with the head of the grenade protruding from one side of the Marine’s leg and the fins of the grenade sticking out of the other side.

At first, the medical staff wasn’t really all that sure what to do with Lance Cpl. Winder Perez, the unlucky Marine who had caught the grenade. They kept Perez on a gurney outside of the hospital while they considered their options. They considered getting the surgeon to cut out the grenade, but they ultimately decided against it – the hospital only had one surgeon.

The surgeon even warned Gennari that he was not obligated to help Perez, but Gennari recalls saying, “I’m a nurse. That’s my job. I’m going.”

Gennari teamed up with Army Staff Sgt. Ben Summerfield, an explosive expert, and together they began what would probably be the most delicate medical operation that all three of the men would ever have to endure. Gennari squeezed Perez’s hand and said, “I promise out no matter what, I won’t leave you until that thing’s out of your leg.”

Perez answered, “Thanks, cool,” and one shot of anesthesia later that was the last thing Perez would remember about the event. 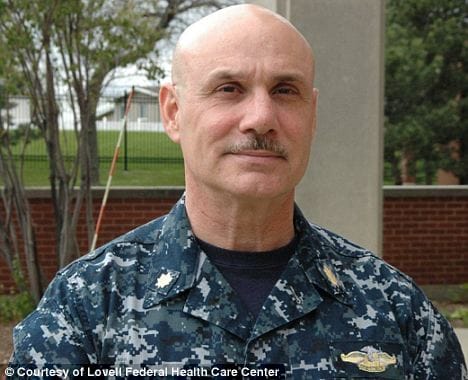 So, here’s a good question: how do you pull a grenade out of a person’s leg? That probably wasn’t covered in explosive ordinance 101. Summerfield went with the most direct method and simply pulled the grenade out. Gennari said that the grenade was pulled free on the third tug, at which point it was quickly moved to a safe spot to be detonated.

When it rains it pours

They may have made it through the worst part, but the struggle to save Perez’s life was long from over. Gennari helped load the injured Marine onto a medevac helicopter and flew with him to another camp 60 miles away. Perez’s ventilator stopped working part of the way through the flight, forcing Gennari to manually sustain Perez’s breathing with a bag-and-valve device. “Go figure,” Gennari said. “The thing doesn’t blow you up, then the damn machine breaks.”

Fortunately, the life-endangering efforts of Gennari and Summerfield were not in vain. Perez survived the trip and has been recovering at the Walter Reed National Military Medical Center in Bethesda, Maryland. The RPG may have shattered Perez’s femur, but he has recovered enough that he is able to run again.

Gennari later called up Perez to see how he was recovering. Perez said he remembered, “this old guy with glasses who came up to me and said ‘I won’t leave you,’” to which Gennari replied, “Well, that would be me.”

On Aug. 9, Gennari received a Bronze Star for his heroism during a ceremony at the Captain James A. Lovell Federal Health Care Center, but he doesn’t seem to be letting the award and the media attention get to his head. He told reporters, “I know what I did was extraordinary, don’t get me wrong, but I don’t see myself as a hero. Being a good dad and husband makes me a hero.”

Gennari posed for photographs after receiving the award and asked the crowd, “How’s it look?” One of the photographers answered, “Very shiny.”