I’m here for you.  I understand.  It’s time to check under the couch cushions.  Clean under the seat of your truck.  Take apart that washing machine and pull out the dimes that’ve been rattling around in there for.  If you can come up with $7,390 in spare change, I have five ideas that will help you beat the 1911 blues.

Springfield Armory makes some of the best production model 1911s around.  That working familiarity of the platform has given them the perfect experience to monkey with the design.

Their EMP is a scaled down 1911 chambered in either .40 or, as I would prefer, 9mm.  The whole gun is slightly smaller than a normal short barreled 1911, but still has a three inch barrel. 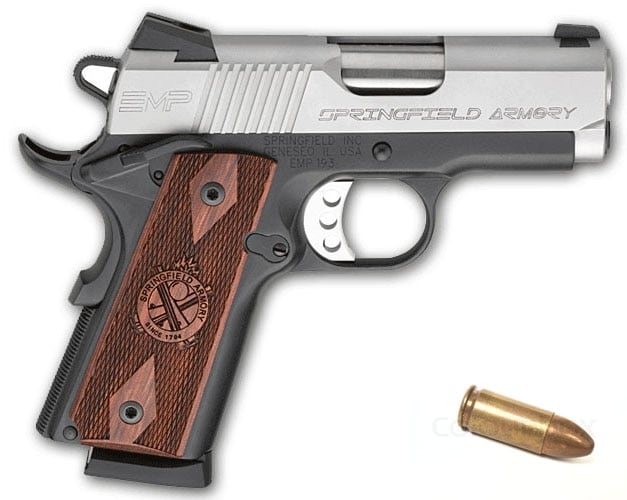 The EMP is a solid option for back-up work or concealed carry.  And that may be the center of this argument, and one that I’ve made before.  If you already know the 1911 platform, it makes sense to have all of your handguns operate in that fashion.

And the 9mm round offers other benefits.  It is lighter, less expensive and more readily available.  We can argue about ballistics, and we will, but the 9mm is a fine round — especially when it is good and hyped up.  That said, the EMP is going to set you back.  MSRP is $1345.

But you want more.  We all do.  If there is one bone to pick with the .45 it is the speed of the round.  The .38 Super was supposed to take care of that.  Yet the zippy round never really caught on.

The .357 took over the revolver world, but the .38 super has just barely limped along (even though it works great). 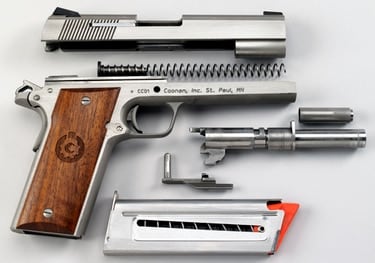 Coonan, one of the more obscure pistol makers, has done what many of us have only ever dreamed about and made a functioning .357 with 1911 style.  This beast of a gun is more than a novelty.  Their magazines reliably feed the awkward rimmed cartridges.  The result is a hard hitting automatic that shoots ammunition that is easy to get.

And the pistol is surprisingly priced.  There are many production guns that come in much higher.  Coonan’s $1,249.00 price tag is most reasonable for what you get.

Colt made .22 LR 1911s and conversion kits for years.  The .22 LR 1911 is really valuable training tool.  The gun allows you to practice without the expense of .45 ACP ammo, and without putting excessive wear on your carry gun.

And, if you shoot yourself in the foot practicing single action holster draws, the hole will be much smaller. 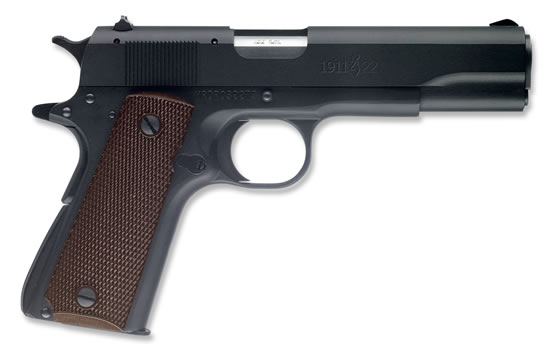 But I respect what Browning has done.  Their 1911-22 is more than a practice piece.  It is a straight shooting gun in its own right.  And the homage to the aesthetic lines of the old 1911 A1 are nostalgic and handsome.

I’d suggest buying two — one A1 size as a practice piece, and one of the compact models.  The compact models are scaled down just enough to feel small in your hand, but that’s what make them insanely cool.  And at $599.99 they aren’t going to break the bank.

I have no problem with the ballistic performance of the .45 ACP.  I hope I never do.  But some have run up against threats that have required something more.

From the early days of automobiles, law enforcement agencies have been arguing about how-much-is-enough, and how-much-is-too-much.

One of the results of this is the .40 S&W.  The current .40-caliber round started service with a bit more brass (and a bit more powder).  But the 10mm, as it has come to be known, was deemed a bit too hard to handle. 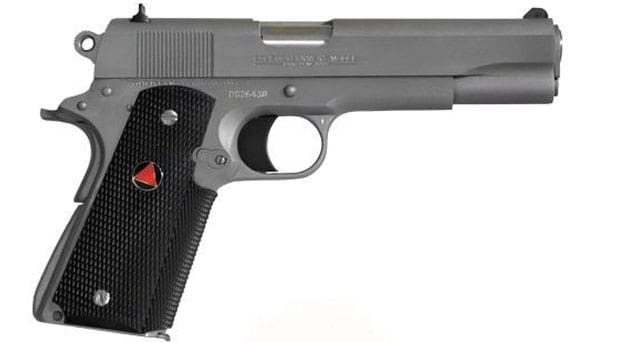 But Colt has a 1991 model that can handle it.  And if you can control the gun, the 10mm is just about the practical limit for the 1911.   While the round creates intense recoil, the downrange effects are even more destructive.

The Colt Delta is reasonably priced (MSRP is $1,012) and provides a tactical platform for the 10mm that takes the 1911 to the logical extreme.

It is possible, actually, though a bit more complicated.  One of the complexities of the 10mm and the .357 is the length of the cartridge.  There is just so much brass you can fit inside the handle.  But there is room for more lead.

And Gun Crafters has devised a .50 GI 1911 that shoots rounds that are big and slow — 300 grain lead, round nose bullets.  The idea is based on an alternative ballistic calculation model called the Taylor KO factor. 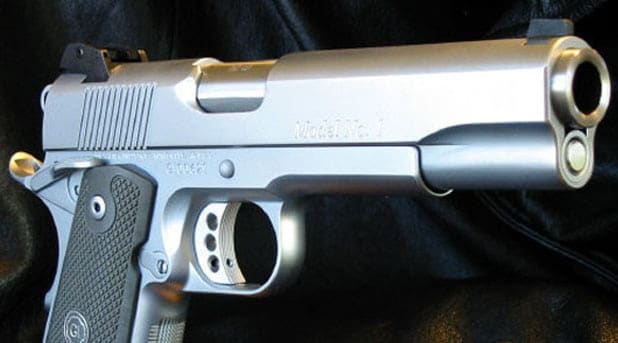 I’m not sure I buy into the theory, but it would be a nice addition to any collection.  An expensive addition, at $3,185.

There are other chamberings for the 1911.  Many others.  Too many, maybe. Me personally, I prefer a straight up 1911 A1.  But I’m not a collector, really.  I think I’ll start with the Browning, and get back to to working on my fundamentals.  But I’m saving my pennies for a .50 GI.