On Friday, a group of approximately 40 sign-toting, gun rights advocates gathered in front of D.C.’s city hall to voice their support for concealed carry.

The energetic crowd of, what was reportedly, “young people” used chants and adapted lyrics from popular songs to convey their message.

“You gotta fight. For your right. To caaaaarrrry!” – a clever take on a Beastie Boys classic.

Rally organizer, 25-year-old Mike Armstrong told the Washington Times that although the protest arrived on the heels of the shooting at the Family Research Council in downtown D.C., where an unarmed security guard was shot in the arm, attendees had been planning the rally for some time.

He added that allowing law-abiding citizens to carry concealed firearms might help to stop a tragedy like the recent shooting in Aurora, CO, or the shooting at the Sikh Temple in Wisconsin from escalating, noting that D.C.’s violent crime rates are a sign that the city’s onerous gun laws are not working.

“While we support their right to express their opinions under the First Amendment, the facts are clear that more guns do not equal safer communities,” Ribeiro told the Times.  “States with the lax gun laws and higher gun ownership rates have the highest per capita number of gun related deaths.”

“The District is currently on pace to have the lowest homicide rate it’s had in over 40 years; our laws are working,” Ribeiro added.

What’s ironic about the Mayor’s statement is that over the past four years the District has actually loosened its gun laws, starting in 2008 with the landmark Heller decision that overturned the city’s handgun ban. 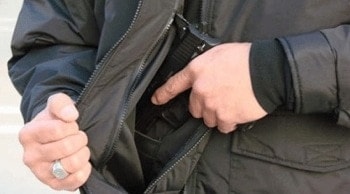 So, it certainly begs the question, if D.C. lawmakers were to continue to loosen its gun laws would the homicide rate drop further?

As I’ve argued in the past, tying crime rates to gun ownership is ultimately reductive – for both camps.

There’s little empirical evidence to suggest that gun ownership has any positive or negative impact on the overall violent crime rate (or homicide rate).

However, though, as a result of this evident truth, it makes zero sense to keep law-abiding citizens from exercising their Constitutional right to keep and bear arms.

But convincing people of this reality — gun control is futile, increased gun ownership does not increase crime and we have a 2nd Amendment to the Constitution — is always an uphill battle.

It seems there’s no shortage of people like Danielle Forsythe, of Woodbridge, Virginia, who was so disgusted by the pro-gun crowd on the steps of city hall that she called them “idiots.”

“It doesn’t make any sense because so many people die because of guns and people who are careless with them,” she told the Times.

In a politically charged climate, with gun control supporters gaining traction in the wake of those aforementioned mass shootings, the question gun owners need to start asking themselves with more frequency is: How do we get through to people like Danielle?