Would You Like to Shoot Osama Bin Laden? Now You Can!

People will shoot at some pretty weird things. These people were under investigation for shooting at an Obama shirt, Hornady gave people zombie targets to obliterate, and a while back those Trayvon Martin targets were selling like hot cakes.

Well, now we can add another bizarre niche target to the list: Osama bin Laden. 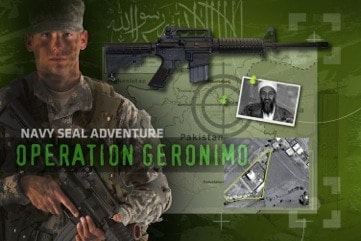 Former Navy SEAL Lawrence Yacht is giving people the opportunity to recreate the raid upon Osama bin Laden’s hideout. Can you clear the dangerous installation and be the first one to put a bullet into one of the worst terrorist who ever lived? For the low price of $325, you can find out.

Yacht and his wife own and operate Sealed Mindset Firearms Studio, a training facility in New Hope, Minnesota, that offers firearms classes, defense fitness and the most authentic combat experience a civilian could ever dream of.

Class is in session

The night of fun starts off the way you’d expect: with some basic firearm safety for the gun noobs. Even veteran gun owners will want to pay attention, though, because the course also touches upon advanced military tactics. You may know your way around a pistol, but do you know how to clear a room or back up your buddy as you advance along a blind corridor?

Next, participants will learn how to operate and fire an AR-15 rifle, which they will use during the raid. They’ll also have a chance to squeeze off a few live rounds at the shooting range by opening fire on some bin Laden practice targets. Yacht recommends that people aim for “anything above the mustache and below the turban.”

The group quickly graduates from nervous students to unofficial Navy SEALs charged with the task of assassinating one of the world’s most hated terrorists. Somewhere in the shadowy corridors of an industrial center-turned-paintball range lurks a bearded, gun-toting terrorist who has a thirst for American blood. Our great nation must rely on you and up to seven of your buddies to end bin Laden’s reign of terror once and for all.

It starts with a military-style briefing session wherein the instructors describe the facility and point out where they believe bin Laden to be hiding. Once inside, it will be up to these rag-tag adventurers (with a little bit of help and guidance from the instructors) to raid the facility.

To complete the feel, participants will kit up with authentic Navy SEAL combat gear. The only things that are fake are the bullets – they use military grade simulated rounds. They’ll still give off the bang and the muzzle flare, they just won’t punch holes in the poor sap getting paid to dress in a robe and a turban.

Nothing says “I Love You” like shooting a terrorist

For those of you out there who are looking to put a little bit more romance back into your love life, Sealed Mindset also offers focused couples training courses. That shouldn’t be surprising, considering that the facility is run by a husband and wife team. Couples can improve their love for firearms and their love for each other by participating in a gun-focused date night or a raid on bin Laden’s facility.

Think this might be the perfect thing for you and your gal on your upcoming anniversary? There just so happens to be a Groupon deal for 54 percent off: $149 for a night of terrorist slaying ($325 value). The offer expires tomorrow at midnight, so you’d better grab one quickly.

We could really use a few more facilities like this around the country. This kind of reminds us of Justice Kagan taking Justice Scalia on that hunting trip a while back. By the end of the hunt, Scalia was willing to admit, “It turns out, (hunting is) really good fun!” Forget all the politics, political slogans and statistics.

The best way to win people over to the side of gun love is to put a rifle in their hands and show them just how exhilarating these things can be — and nothing will tempt people more than the opportunity to gun down Osama bin Laden.