Don’t bring a knife to a gunfight.  Heard that one before?  I bet you have.  Apparently, 51-year-old Darrius H. Kennedy never got that memo.  Of if he did, he just ignored it.

About a week ago, New York City police officers confronted Kennedy as he was strutting through Times Square, acting suspiciously.
When police commanded Kennedy to surrender, he did not listen.  Instead, he pulled a knife.  Needless to say, it didn’t help the situation.  Police, with their firearms drawn, then followed Kennedy as he skipped down Seventh Avenue, his knife still in hand.

According to the officers on scene, at some point throughout the pursuit, Kennedy evidently thought it would be a good idea to “lunge” at the officers.  He was mistaken.  Police opened fire, fatally shooting the man.

What’s interesting about this particular incident is that it was caught on tape – not just by one bystander, but by the throng of people captivated by the drama of what appeared to be a knife-wielding maniac taking on a group of gun-toting police officers.

To put it another way, these people weren’t only watching the event, but they were documenting it for law enforcement, for the court and for the public to bear witness to, even if they didn’t realize it at the time.

“If a picture is worth a 1,000 words, video is worth 5,000 pictures and so to have any sort of raw footage is incredibly helpful to investigators,” Larry Cunningham, a former Bronx prosecutor who is an associate professor and associate dean at St. John’s University School of Law in Queens, told the NY Times. 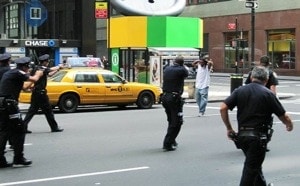 “Even if it looks like a clean shooting, authorities are still going to investigate it,” Professor Cunningham said. “Here, the district attorney will probably still present the case to a grand jury so they can say that an independent body looked at this evidence and decided not to bring charges.”

In a sense, this collection of public footage is a way of crowd sourcing crime solving.  Instead of relying only on the fallible word of an eyewitness to determine whether a shooting was justified, investigators can examine the evidence on the camera phones of the public.

As mentioned, that evidence can then be brought before a grand jury, which can make what is presumably a more informed decision about whether or not to bring charges against the shooter, in this case, the officers (for a more detailed account of the shooting, click here).

Also, what’s fascinating, is that these videos bring about a de facto checks and balances between the public, the court and the cops.

See, shortly after the shooting, some of those videos hit the interweb.  That is, people uploaded them to YouTube and Facebook, and some even shared them with local television stations.

With the footage out there on the web, the public can get a sense of what actually occurred, which means if the cops tried to cover up something or mislead internal investigators and/or prosecutors, the public would – at least in theory – know about it.

While this isn’t exactly a new revelation, camera phones have been around for quite some time now; it’s certainly happening with greater frequency (the exponential expansion of YouTube can certainly attest to that).

The question then becomes, what do you think about all of this?  Should we feel better about society knowing that seemingly everyone has a camera phone?  Moreover, that the public eye is no longer just watching, but recording everything?

Also, what are your thoughts about this shooting, was the NYPD justified in taking out Kennedy?