What goes well with ice cream? Sprinkles? Yes. Chocolate syrup? Definitely. How about a 30-inch Japanese-style samurai sword? Eh, that’s a bit of a stretch, but for at least one would-be robber, it seemed like the perfect weapon. 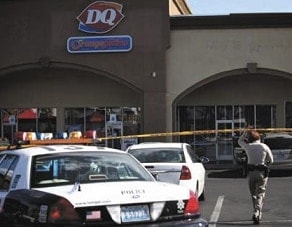 At around lunchtime on Sunday, a masked man — 36-year-old Bong Pak — entered a near-empty Dairy Queen nestled in the Las Vegas Valley. According to eye-witness reports, the masked man drew his katana, began screaming and violently swinging the blade at the store employees.

It is a stroke of luck that no customers were in the store, but the three clerks who work there – a father and his two sons – were not so lucky. One of the family members, whose identity has not been disclosed, cut the robbery short when he pulled out a gun and shot the masked robber twice.

Police arrived on the scene a short time later and transported the wounded swordsman to the Sunrise Hospital and Medical Center where he was pronounced dead.

While this might serve as an example of the importance of gun rights, it certainly felt like a day of tragedy for locals who lived in the area. Kimberly Philips-Atkinson, who was shopping in the same strip mall, told KTNV news, “I do know the two boys that work there with their father. They’re very nice, very helpful people. They’re both traumatized by what happened.” She added that after the shooting she saw one of the boys sitting on the curb next to the Dairy Queen, crying.

If anything, Kimberly Philips-Atkinson represents the feelings of sympathy and understanding shared by many other members of the community. It is regrettable that swordsman was shot in front of these three family members, but it certainly appears that it was necessary.

Patrick Gorgan, another local, echoed, “It’s a really nice Lebanese family … I’m so thankful they weren’t hurt. They did the right thing. But, this will change their lives forever, there’s no question about that.”

In a somewhat auspicious coincidence, a firearms instructor just happened to be walking by while the press was on the scene. Michael Murray stopped to share his thoughts with Fox 5 Vegas. He pulled back his jacket to reveal a pistol strapped to his side and argued, “It’s a basic human right of self-defense.” He added, “If more people would do that, I think some of the criminals would realize there’s some easier ways to make a living than taking their lives in their hands doing it.”

Even the police are getting behind the family. Homicide Lt. Ray Steiber acknowledged the danger of the situation: “I’ve seen it before. It’s a deadly weapon in the right hands, and preliminarily, it appears he was using it as a deadly weapon.”

However, authorities are investigating to make sure that the gun was properly registered. As of Sunday, the police had made no determination as to whether they would recommend bringing charges against the clerk. Lt. Leslie Lane, a Metro watch commander, does not believe that the employee will face charges.

As a bunch of gun rights advocates, we always have to take these stories with a jumble of mixed emotions. On the one hand, it’s terrible that this had to happen at all. On the other, events like these serve to remind America that guns really do save lives.

For every James Holmes, there are people like these Dairy Queen employees who just want to live their lives without the constant threat of being attacked or robbed.