Last week, I posted an article about Gun Safe basics, called Gun Safe 101.  I caught some flak for my myopic focus on Browning ProSteel Safes.  That’s cool.  It was not a Browning ad.  I would like to be completely transparent about this — I’m documenting the process of choosing a safe.  I’ve called and emailed companies.  I’ve read through all of the literature I can put my hands on.  When possible, I have gone to see the safes in person.

Some phone calls and emails were never returned.  Others politely said they didn’t want participate.  Browning opened the doors wide and answered every question.

Browning ProSteel Safes offer the single best combination of security, options, competitive pricing and customer service.  Of course, this is an opinion — but a heavily researched opinion.

There are other companies that offer great products.  One the frequently came up is Liberty. 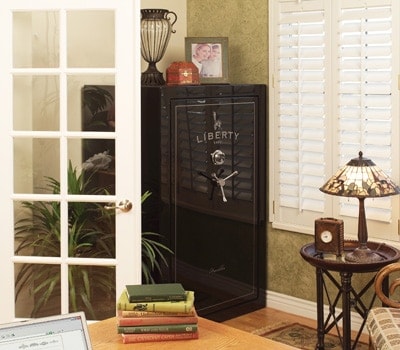 Liberty makes safes for their own house brand, and safes that are rebranded by several other companies.  Liberty makes a fine safe, and they’re actually offering a deal to Guns.com readers.

In the introduction to gun safes, I wrote a bit about some basic security considerations.  This article will get more in depth about how safes are designed to keep people out.

Again, the most important question is what do you want to keep safe, and from what, but this time I’m assuming it isn’t that curious five-year-old, and it isn’t fire.

And I’m not talking about a locksmith misusing his professional training, or some Hollywood bozo in black tights with a stethoscope and a pair of kidskin gloves.  I’m talking about attacks.

Let’s say you live out in the sticks.  No neighbors to look in on your place while you’re gone.  Some crafty son-of-a-bitch decides to break in.  After rummaging around for a while, he stumbles across a big UL listed Residential Security Container with a nice hunting scene painted on the front.  Looks promising.  But how is he going to get into it? 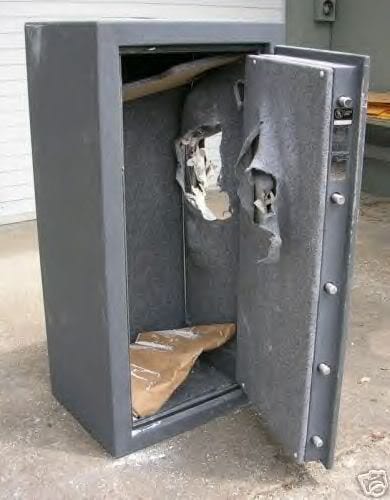 With no one around to hear the loud noises, or observe his actions, he is free to attack this box with whatever he can find.  Drills.  Pry bars.  Cutting torches.  Sledge hammers.  Grinders.  Saws.  It is best to store these sorts of things well away from your safe.

But nothing will keep an intelligent thief out forever — though there are companies that claim they’ve never had a safe broken into.  But Browning, like most, has built in threat deterrents to slow him down.

The most obvious is the steel itself.  Browning ProSteel makes its safes from 10, 11 and 12 gauge steel.  Remember that “gauge” as a term of measurement is a bit counter-intuitive.  Like with shotguns, smaller numbers denote bigger whatever.  So 12 gauge steel is thicker than 16 gauge, but thinner than 10 gauge.  Once you get above 10 gauge, like the Platinum Plus, steel is measured in fractions — in this case 3/16”.

Steel is fascinating.  I don’t have enough room in this piece to go into detail, but there are some basics.  Harder steel is more brittle.  That means it would break before it bends.  If steel is too soft, it is easily cut.  There has to be a balance between metal composition and its hardness.  It needs to be resilient, yet a bit pliable.

Browning builds its safes from 1008 hot rolled steel, which has a good mix of tensile strength and a certain amount of elasticity.

The door of a safe has to open and close easily when appropriately unlocked, but stay closed when it is locked.  The number of bolts in a door is important.  The length of the bolts, also.

Most Browning ProSteel Safes have moving bolts on all four sides.  This allows for a really tight connection.

The Sporter and Bronze lines have moving bolts on two sides.  Instead, the hinged side has permanent posts that look like bolts that secure that side.  There are no posts on the bottom, which would be potential area of concern if the safe weren’t bolted down.

Some of the big economy safes built by other companies don’t have bolts or posts on the hinged side, which makes a pry bar attack much easier (once the hinges are removed or compromised).

So look for these features.

The type of lock (electronic vs. dial) is less important from a security standpoint than a hardened piece of steel protecting the mechanism from direct attack.  Browning, like every safe company, has some catchy names to describe the devices they build into their safes.  Some of their safes employ the Force Deflector Locking System.  Others use the Uni-Force Locking System.  When you combine their Duo-Formed Door with the Omnibarrier Lock Protection System, you get a solid safe.  The trademarked names and registered patents will make your head spin, but keep your guns safe.

If the safe is attacked with brute force, a relocker will trip and essentially lock the safe up tight.  While this isn’t permanent, it will slow things down significantly.

While the thickness of the steel is important, you should pay close attention to how a safe is put together.  Welds are, generally, weaker than bent steel.  But running welds, which are continuous, are stronger than stitch welds.  Some companies fill in stitch welds with Bondo, sand it down and paint it.  A terrible idea.

Also look at how well the door fits.  It should be perfect.  There should be very little play between the door and the body when a safe is locked.  Any slack is potential room for tools to be inserted. 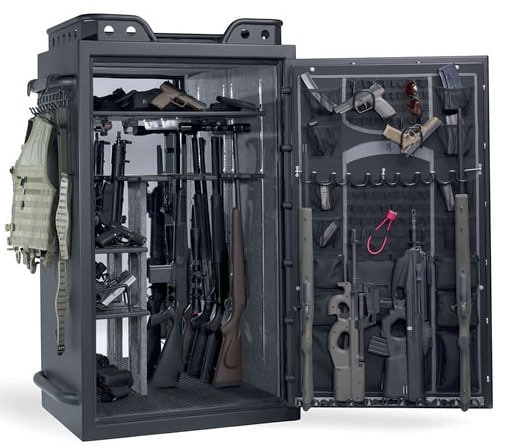 Take a look at this Browning ProSteel Tactical Safe.  After you’ve finished drooling over the collection, check out the bolts.  The one on the top and outside of the door are chrome, which means they are active.  The back side of the door has six fixed posts.  There is nothing on the bottom of the door, which means this thing better be bolted down.  If it isn’t bolted down, all of this could be meaningless.

If you live in a neighborhood, or have one of those blue-haired bastions of the neighborhood watch program that watches everyone’s every move, than our aforementioned SOB will have to take the safe with him — quickly.

To prevent their safes from being stolen, some have decided to make whole rooms into vaults, and Browning even sells vault doors that look exactly like typical residential doors.  But most safes can be moved with a dolly, or hand trucks.  And a couple of enterprising SOBs with a pickup truck can make off with a safe reasonably quickly.

How to best thwart their efforts?

A good heavy box is a great place to start.  With any luck, the safe will tip over on the idiot and pin him down for Officer Friendly.  But heavier is only better, to a point.  You still have to get it inside. 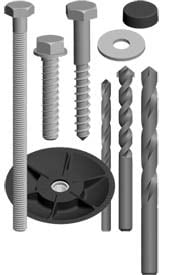 Bolt that thing to the floor.  I’m surprised how many safe owners neglect this.  So I repeat it over and over like a mantra.

This is especially effective if lag bolts are sunk into a concrete floor. Do what you can to install it semi-permanently (or even permanently) and you increase your chances of keeping everything, including the safe, where it belongs.

There are kits available, like this one from Lockdown Vault Accessories, or head out to the hardware store.

The easiest way if a safe is secure is to look at the price tag.  The less expensive safes are not going to stand up to as much abuse.  How much security do you need?

If a firearm or other valuable object is replaceable, than do what it takes to protect it.  Secure it.  One comment on the last safe article suggested insurance, too. I couldn’t agree more, though I know that some gun owners are — how do I put this — more cautious about how they document their collections.

But I have one gun that isn’t worth anything to anyone except me.  And for me, it cannot be replaced.  So I secure it in a huge, heavy steel safe, one that is bolted to the floor and one that would keep this old rusty pistol safe from fire.  More on that to come.