While a healthy sense of distrust and skepticism for the U.S. government is the only silver lining in this 20-year-old, gloomy cloud, adult Sara Weaver is willing to look past the incident on Ruby Ridge and offer forgiveness. Two decades ago, she witnessed the death of her mother, her father being shot twice by U.S. government snipers, and she crawled around the floor of her home for 10 days as she struggled to collect food and water for her terrified family. Twenty years is a long time for a wound to heal, though. Sara, now 36 and a born-again Christian, has found it in her heart to forgive the people who laid siege to her family.

“All bitterness and anger had to go. I forgave those that pulled the trigger,” she said. “After losing mom and Sam, I almost felt guilty even thinking about being happy after they were gone. But that’s a lie. Your family members don’t want you to grieve them. They want you to move on.” 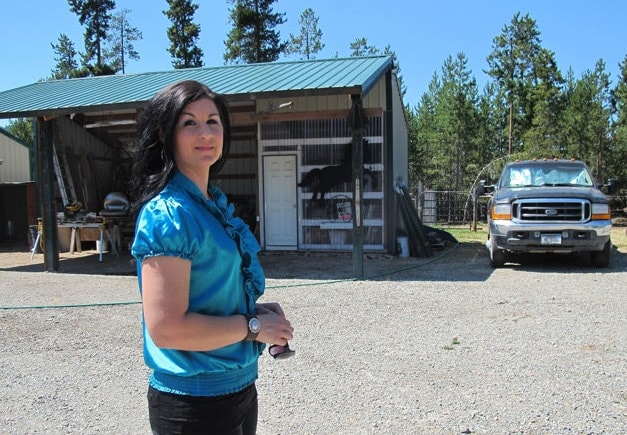 “It’s hard to live without (your mother) to turn to,” she said. “I want to turn to my mother for advice. We miss her terribly. It never goes away.” Sara Weaver may be able to forgive what happened at Ruby Ridge, but she isn’t willing to forget — and neither is the rest of America.

It’s hard to know where to begin with the Ruby Ridge incident, because nothing that happened is fully black and white. Mistakes were made by both parties involved and many of the details are still disputed to this day, so the safest place to start is back at the beginning — where it all began.

It’s funny how tiny things can spark such a gigantic conflict. The Hatfield & McCoy feud could be accurately described as starting over a pig, and the Ruby Ridge incident can be traced back to a $3,000 land dispute. Randy Weaver and his neighbor, Terry Kinnison, got into an argument over a land deal. Kinnison lost the dispute, prompting the disgruntled neighbor to write letters to the FBI and Secret Service warning them that Weaver — an Army veteran — allegedly planned to kill the Pope, the President and other prominent figures. 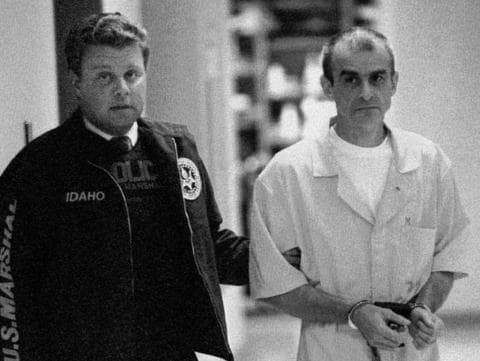 The FBI and the Secret Service started poking around and they discovered that Weaver was associated with Frank Kumnick, who was a member of the Aryan Nation. What probably didn’t help Weaver’s image is that he and his family were extremely isolated from American society. The Weaver family lived in a quiet home in the Idaho countryside in order home school their children and protect themselves against what they perceived as an unjust and corrupt world. That is certainly not illegal, but Weaver’s vocal distrust for the U.S. government was the cherry on top of this messy situation.

Things got complicated after Weaver sold two shotguns to an ATF informant, who later claimed that they were illegal sawed-off shotguns. Weaver’s defense was that the shotguns were altered after the sale, which was sufficient to get him off of the charge of selling illegal weapons, even if he was indicted for making and possessing illegal weapons.

ATF agents informed Weaver that his trial would begin on Feb. 19, 1991. However the court system proceeded to needlessly screw up the situation and make a mountain out of a molehill.

The judge changed the date from Feb. 19 to Feb. 20. The court clerk notified Weaver’s lawyer, Everett Hofmeister, of the change, but he didn’t send a letter to Weaver. Hofmeister then made several attempts to contact Weaver and at one point wrote a letter erroneously explaining that the court date had been changed to March 20, but failed to get a response. The million dollar question is, Did Weaver actually intend to show up?

Predictably, the judge wasn’t particularly thrilled when Weaver didn’t on Feb. 20 and issued a bench warrant for failure to appear in court. The Chief Probation Officer discovered the error and tried to explain the situation, but the judge refused to withdraw the warrant. The U.S. Marshals Service rather logically agreed to putting off the arrest until March 20 to see if Weaver would show up then, but the U.S. Attorney’s Office decided to speed things along by holding a grand jury on March 14. The U.S. Attorney’s Office did not present the erroneous letter as evidence, so naturally, the jury agreed that Weaver illegally failed to appear to court.

The incident at the “Y” in the trails 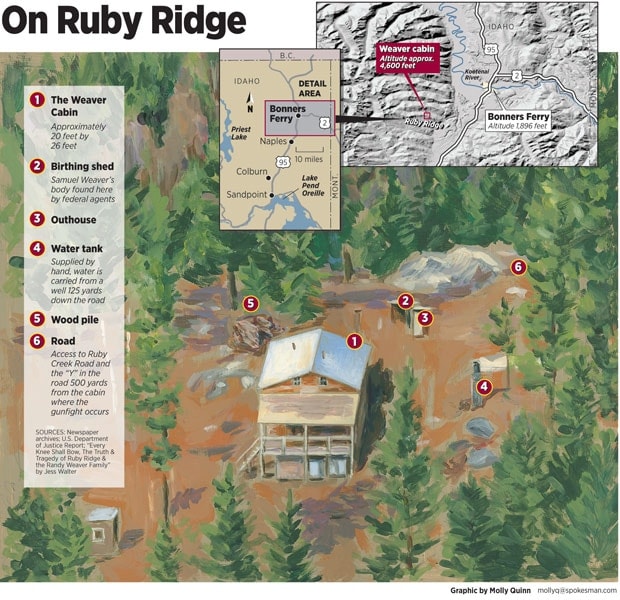 The U.S. Marshals were then tasked with the unenviable goal of bringing in Randy Weaver, who threatened to resist any attempt to bring him in by force. The Marshals spied on the home for a while, but they took a three month hiatus because of an unrelated issue. The Weavers began to believe that the government had dropped the case, but the Marshals resumed investigation on Aug. 21, 1992.

Six Marshals wearing camo went to scout the terrain, which led to a tragic confrontation between the Marshals, Randy’s 14-year-old son, Sam, the Weavers’ dog, and a friend of the Weaver family, Kevin Harris.

Both Sam and Harris were armed with rifles as they thought they may come across either game or an intruder. And when they encountered armed men surveying the property at a “Y” in the trails, bullets started flying.

A total of 19 shots were fired in the confusion. There were conflicting reports about who shot first and if the federal agents ever clearly identified themselves, but what is certain is that the whole ordeal left Sam, the dog, and Deputy U.S. Marshal William Francis Degan dead.

The shit hit the fan after that, with the government beginning a siege that lasted until Aug. 30. On the second day of the siege, Aug. 22, Randy Weaver left his home to visit the body of his dead son. A sniper took the opportunity to shoot Weaver in the back. He claimed, however, to have aimed for Weaver’s spine, but Weaver moved at the last moment and the bullet passed through his shoulder in a non-lethal wound.

Weaver attempted to flee back to the house with along with his daughter Sara, who was 16 at the time, and Harris. The sniper fired a second shot through the house door, which passed through the head of Randy’s wife, Vicki Weaver (she was holding their 10-month-old baby at the time) and struck Randy in the chest.

The Weavers surrendered on Aug. 30, but while that may seem like a victory for the U.S. Marshal vs Weaver struggle, the U.S. government would absolutely not win the war. 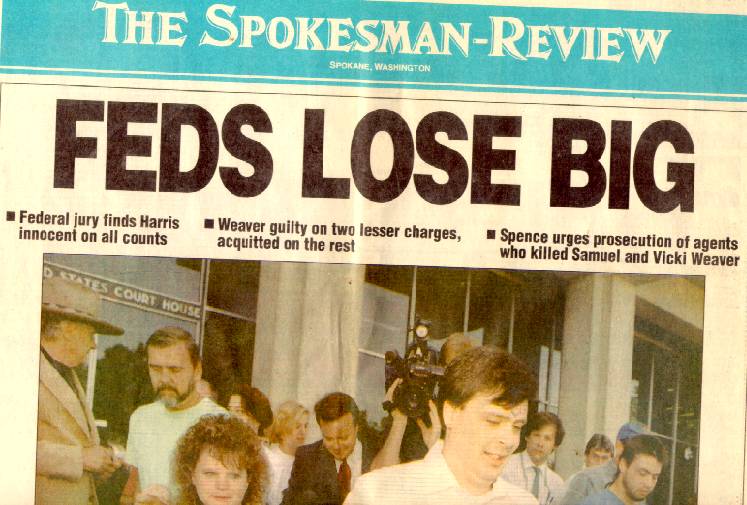 There’s one thing missing from that list. Can you think of what it is? A call for surrender. The agents had no orders to request — their orders were to shoot first and ask questions later.

To put it bluntly, the American people were infuriated by this. The Weavers could have responded more reasonably, certainly, but that didn’t justify such aggressive use of lethal force and inexcusable refusal for a surrender call. The 1994 Ruby Ridge Task Force and the 1995 Senate subcommittee blasted the rules of engagement as unconstitutional, giving members of the Weaver family enough firepower to file a wrongful death suit. The government folded and settled out of court, awarding Randy Weaver a $100,000 settlement and each of his three daughters $1 million each. Harris was later awarded $380,000 in settlements from the government.

Of course, these checks were just minor wounds. The real injury came from the growing distrust and hatred that the event sparked in the hearts of American citizens. The people saw what the government was capable of doing, and, frankly, it was terrifying. The events at Ruby Ridge have been cited for influencing anti-government patriot movements and the Oklahoma City bombing.

Aug. 21, 2012, marks the 20-year anniversary of the incident at the Y in the trails that sparked the highly controversial Ruby Ridge siege. The event that has received national attention and dramatically affected American politics, laws and public sentiments. Today’s an important day for Americans – not a good day or a bad day, necessarily, but an important day.