One of the world’s most wanted criminals might find himself in the crosshairs of U.S. Navy SEALs, a Mexico City publication has reported.

Anonymous sources in U.S. and Mexican military circles told Proceso magazine that drug kingpin Joaquín “El Chapo” Guzmán, a high value target in President Calderon’s War on Drugs, might be hunted down in an operation similar to the one that nabbed terrorist mastermind Osama bin Laden in 2011 (Operation Neptune Spear).

The alleged plan involves sending in three teams of Navy SEALs into the mountainous states of Sinaloa and Durango, where Guzmán, the leader of the world’s most powerful drug trafficking operation, the Sinaloa Cartel, is believed to reside.

Two SEAL teams would descend on Guzmán’s compound while the other would stay airborne in a helicopter flanked by heavily armed, unmanned drones.  SEALs would then carry out the “kill or capture” mission, snuffing out any resistance from retaliatory forces.

Sources defined the proposed operation as a “simple, quick, and surgical” strike against “El Chapo.”

The “El Chapo” operation would be “observed and directed “in real time” from the headquarters of the Pentagon’s Northern Command, and even from the offices of the National Security Council at the White House,” Proceso reported.

However, unlike the bin Laden raid, President Obama will not be present.  Instead commanders from the Pentagon and from Northern Command (NORTHCOM) would oversee the operation, which would be carried out “exclusively by members of the Navy of the United States, without any intervention by Mexican police or military elements.”

In short, U.S. forces would do all the heavy lifting because the Mexican military is ill equipped to carry out such a “delicate” mission.  As the Proceso article alluded to, “the plan does not fit Mexican military or Army or Navy.”

Anonymous sources?  Mexico City publication?  The obvious question is, does this plan have any legitimate support from the U.S. military or is it just wishful thinking by Mexican journalists?

Well, in a detailed article, Robert Beckhusen of Wired.com gave readers good reasons to question the veracity of the Proceso report.  His main point why the U.S. government is probably not planning a bin Laden-like mission in Mexico was rather straightforward: “Mexicans hate U.S. troops on their soil even more than the Pakistanis do.”

A tough point to dispute. 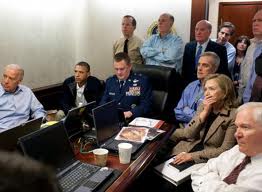 He also reached out to James Bosworth, a Latin American crime and security analyst, who said that there’s a clear distinction between bin Laden and “El Chapo.”

“The Obama administration has a policy to disrupt transnational criminal organizations as well as improve security in Mexico,” Bosworth told Beckhusen in an email. “How much does getting El Chapo really contribute to those goals? It certainly has some effect, but El Chapo is no bin Laden, symbolically, ideologically or organizationally.”

Bosworth went on to intimate that taking out “El Chapo” would not really disrupt the larger, systemic problem of Mexico’s drug trade and while “that doesn’t mean that El Chapo isn’t worth getting,” it’s just that he’s not “worth a high-risk operation that could damage relations with Mexico.”

Of course, there are other reasons too.  Such as it’s against Mexico’s laws, which “prohibit foreign military and law enforcement agencies from operating on Mexican soil, except under tightly controlled conditions and never armed,” as Beckhusen noted.

In the end, it’s tough to imagine a scenario where the U.S. government would sanction the “El Chapo” operation, especially considering all the blood and treasure we’ve sacrificed over the past decade in the War on Terror.

That said, if the U.S. had a solid bead on “El Chapo,” would you support a “capture or kill” mission using U.S. operatives?